After several sessions, I have finally learnt the whole of Isaac’s Rigadoon and I am beginning to feel comfortable enough with the choreography to work on shaping it as if for performance.

Isaac focusses on the changing rhythms and shifting dynamics of the Rigadoon’s steps. The footwork is not complicated, there are no quasi-theatrical steps but they are difficult to perform clearly and accurately, particularly at speed. The dance does need to be quite fast to make its proper effect. Isaac repeats steps and even short sequences, but he never exactly replicates sequences elsewhere in the choreography. I have found The Rigadoon quite hard to learn and I am still struggling to find the best way to perform the basic steps. How far should these travel? How much spring should there be in the jettés that come at the end of so many of them? I have performed many of the notated theatrical dances, which need amplitude and force even in basic steps. The Rigadoon requires neither, although it certainly demands swift and lively dancing.

The famous figure with glissades, that according to Kellom Tomlinson ‘forms a perfect Square’ (The Art of Dancing, p. 56), is very hard to get right.

Each bar has two glissades and so has two mouvements and two steps with glissé. These need fast reactions in feet and ankles and downward pressure, without being heavy. The notation of the pas de bourées used to turn the corners is interesting. Each is different and three of them apparently require the first demi-coupé to move on an outward diagonal. I haven’t got this right yet, but it must surely serve to align the partners within the dancing space as well as with each other. The perfect square is formed by the paths of both dancers, who should end where they began but facing each other up and down the room instead of across it. I would love to work on this figure with a partner.

It is hard to get a proper sense of the figures in a duet when working on it alone. This is particularly true of the asymmetric figure in The Rigadoon, in which the man performs three quarter-turn sprung pirouettes as the woman dances around him with pas de bourées and he then moves around her with a coupé, a contretems with a bound and a pas de bourée as she does a coupé to first position, a half-turn pirouette and a coupé. 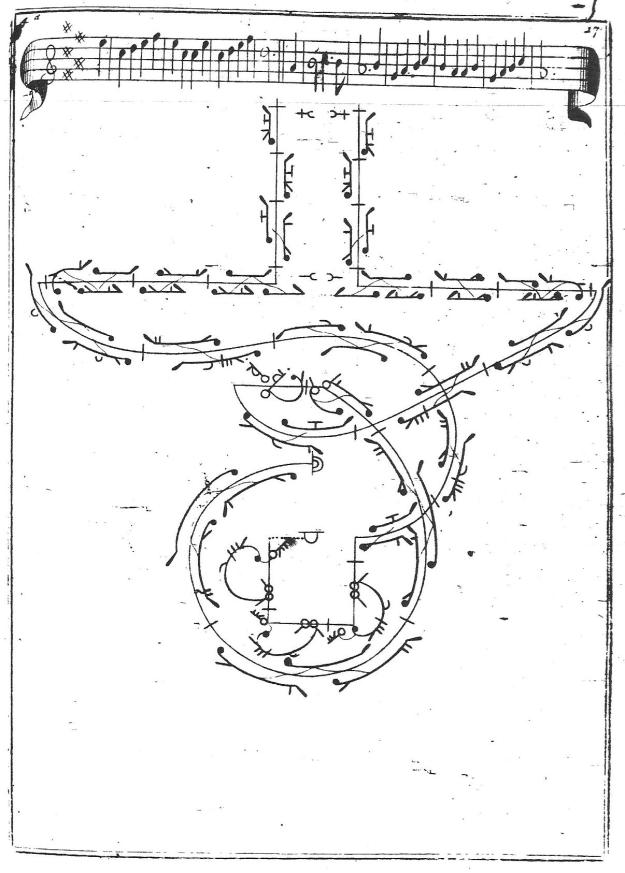 It is such a shame that I am unlikely to get to work on this dance with a partner. I would love to sort out exactly what happens in this section and how it should be performed.

I can’t really analyse the whole dance within a single blog post, so I will just look at those of Isaac’s choreographic effects that I really enjoy (from the point of view of the lady, as this is the side I have been working on). One is his use of the coupé to first position, in the second B section and the third A section. It brings the dancer to a dynamic stop after a lively sequence of pas de bourées. In both cases it is followed by a pirouette. The two B sections in the third AABB repeat reveal Isaac’s love of rhythm as well as his wit. The first B sequence comes at the top of the page, just below the music, in the plate illustrated above. There is a little game with the mouvement in demi-coupés, coupé and pas de bourée. Then in the second B (on the next plate of the dance, not shown here) there is a contrast between sliding steps and springs in two consecutive pas de bourée. I love the way Isaac has the couple bound towards one another before turning to face the back in order to travel away from the presence. Even though I can’t try this out with a partner, it always makes me smile.

The point is, of course, that Isaac’s Rigadoon isn’t simply a difficult dance exercise. It is a challenging choreography that is rewarding to learn and wonderful fun to perform. The same is true of the other dances by him that I have performed, including The Richmond, The Saltarella, The Pastorall and even The Union.