After several sessions, I have finally learnt the whole of Isaac’s Rigadoon and I am beginning to feel comfortable enough with the choreography to work on shaping it as if for performance.

Isaac focusses on the changing rhythms and shifting dynamics of the Rigadoon’s steps. The footwork is not complicated, there are no quasi-theatrical steps but they are difficult to perform clearly and accurately, particularly at speed. The dance does need to be quite fast to make its proper effect. Isaac repeats steps and even short sequences, but he never exactly replicates sequences elsewhere in the choreography. I have found The Rigadoon quite hard to learn and I am still struggling to find the best way to perform the basic steps. How far should these travel? How much spring should there be in the jettés that come at the end of so many of them? I have performed many of the notated theatrical dances, which need amplitude and force even in basic steps. The Rigadoon requires neither, although it certainly demands swift and lively dancing.

The famous figure with glissades, that according to Kellom Tomlinson ‘forms a perfect Square’ (The Art of Dancing, p. 56), is very hard to get right. 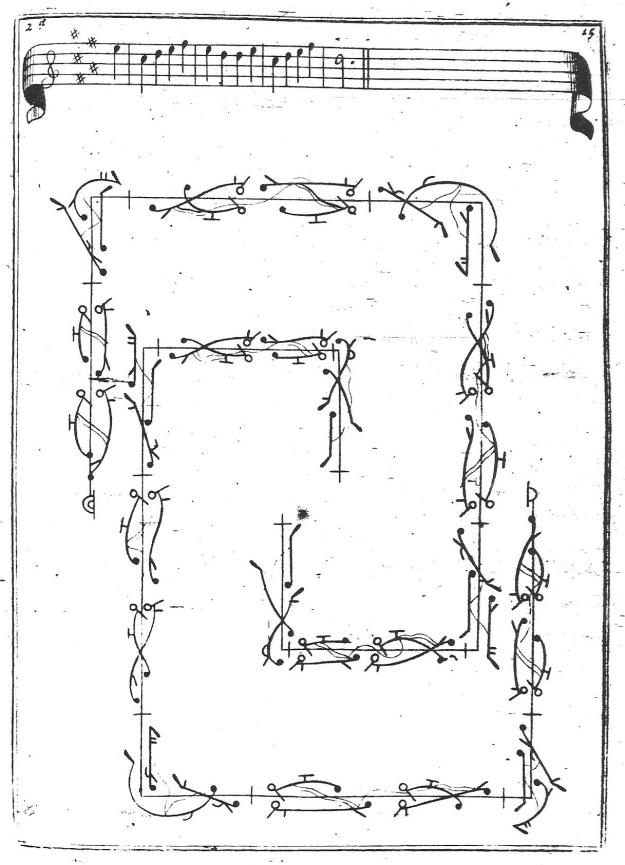 Each bar has two glissades and so has two mouvements and two steps with glissé. These need fast reactions in feet and ankles and downward pressure, without being heavy. The notation of the pas de bourées used to turn the corners is interesting. Each is different and three of them apparently require the first demi-coupé to move on an outward diagonal. I haven’t got this right yet, but it must surely serve to align the partners within the dancing space as well as with each other. The perfect square is formed by the paths of both dancers, who should end where they began but facing each other up and down the room instead of across it. I would love to work on this figure with a partner.

It is hard to get a proper sense of the figures in a duet when working on it alone. This is particularly true of the asymmetric figure in The Rigadoon, in which the man performs three quarter-turn sprung pirouettes as the woman dances around him with pas de bourées and he then moves around her with a coupé, a contretems with a bound and a pas de bourée as she does a coupé to first position, a half-turn pirouette and a coupé.

It is such a shame that I am unlikely to get to work on this dance with a partner. I would love to sort out exactly what happens in this section and how it should be performed.

I can’t really analyse the whole dance within a single blog post, so I will just look at those of Isaac’s choreographic effects that I really enjoy (from the point of view of the lady, as this is the side I have been working on). One is his use of the coupé to first position, in the second B section and the third A section. It brings the dancer to a dynamic stop after a lively sequence of pas de bourées. In both cases it is followed by a pirouette. The two B sections in the third AABB repeat reveal Isaac’s love of rhythm as well as his wit. The first B sequence comes at the top of the page, just below the music, in the plate illustrated above. There is a little game with the mouvement in demi-coupés, coupé and pas de bourée. Then in the second B (on the next plate of the dance, not shown here) there is a contrast between sliding steps and springs in two consecutive pas de bourée. I love the way Isaac has the couple bound towards one another before turning to face the back in order to travel away from the presence. Even though I can’t try this out with a partner, it always makes me smile.

The point is, of course, that Isaac’s Rigadoon isn’t simply a difficult dance exercise. It is a challenging choreography that is rewarding to learn and wonderful fun to perform. The same is true of the other dances by him that I have performed, including The Richmond, The Saltarella, The Pastorall and even The Union.

I am currently learning another of the most famous ballroom dances of the 18th century, Mr Isaac’s The Rigadoon. I first worked on this lively duet some years ago, but I never performed it and I’ve had to start on it afresh. The Rigadoon, like much of the rest of the ‘English’ baroque dance repertoire, rarely (if ever) features in workshops in the UK. Perhaps this is because these dances are choreographically idiosyncratic – and difficult. This is a pity, since they have much to offer in helping us to understand the dancing of the period and they are sheer pleasure to dance. 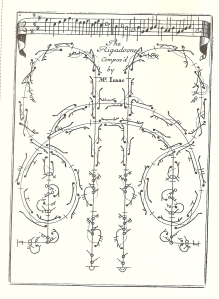 The duet is, of course, a rigaudon. The music has been attributed to James Paisible, the French recorder player who made his career in London, but this is by no means certain. Mr Isaac’s The Rigadoon has been dated as early as 1695. It was first published in 1706 in A Collection of Ball-Dances perform’d at Court, notations by John Weaver of six of Isaac’s choreographies. That same year, the dance also appeared in a different version notated by the dancing master Siris and published in his The Art of Dancing alongside Pecour’s ball dance La Bretagne. Siris’s The Art of Dancing was a rival to Weaver’s translation of Feuillet’s Choregraphie.

Weaver evidently passed his notations (or rather, the plates on which they were engraved) to the music publisher John Walsh, who reissued The Rigadoon along with other dances by Isaac around 1708 and again about 1712. Walsh published a second edition of Weaver’s Orchesography around 1722. In a late response to Siris, Weaver added notations of The Rigadoon, The Louvre (Pecour’s ball dance Aimable Vainqueur) and The Bretagne. Orchesography was reissued, with its dances, around 1730. Within thirty years of its first appearance in print, Isaac’s The Rigadoon had gone through at least six editions.

Weaver drew particular attention to Isaac’s dance in Orchesography, by including four steps from it in a ‘Suplement of Steps’ at the end of his step tables.

The steps, and Weaver’s comment on how graceful and unusual they are, provide a glimpse of English choreographic taste as exemplified by The Rigadoon.

Isaac’s The Rigadoon seems to have been continued to be taught and given in the ballroom for many years. In his 1729 poem The Art of Dancing, Soame Jenyns (referring to the invention of dance notation) wrote:

‘Hence with her Sister-Arts shall Dancing claim

An equal Right to Universal Fame,

And Isaac’s Rigadoon shall last as long

As Raphael’s Painting, or as Virgil’s song.’

A few years later, in 1735, Kellom Tomlinson referred to The Rigadoon several times in his manual The Art of Dancing. In describing ‘the Slip’, i.e. the glissade, Tomlinson wrote:

‘ … twice slipping behind, is in the Rigadoon of the late Mr. Isaac, where, in the Beginning of the Tune, the second Time of playing over, it forms a perfect Square, which is no small Addition to the Beauty of the said Dance; …’

Tomlinson mentions a number of notated dances in The Art of Dancing. Are these the choreographies he taught to his own pupils, including Isaac’s The Rigadoon?

Twelve years later, in his Essay on the Advantage of a Polite Education published in 1747, Stephen Philpot also referred to Isaac’s The Rigadoon since he featured the dance in his own teaching practice. The ball dance may well have survived into the 1750s. On 19 March 1752 at the Covent Garden Theatre, Cooke and Miss Hilliard gave ‘A Ball Dance call’d the Rigadoon concluding with a Minuet’. The performance was a benefit for Cooke.  On 12 May 1753 at Drury Lane, Mr and Miss Shawcross danced ‘The Rigadoon and Minuet’ for his shared benefit. If these performances were indeed Isaac’s The Rigadoon, then the dance must have continued to be taught in dancing schools for more than fifty years.

I will take a closer look at the choreography of The Rigadoon in a later post.