Somebody recently mentioned one of Gallini’s cotillons to me, with particular reference to its name. I thought it might be interesting to take a look at his dance titles to see if any patterns emerge. Meaningful analysis is difficult without access to a comprehensive list of cotillon titles, French as well as English, throughout the period when this contredanse was popular. However, a little while ago I compiled a list of the titles of the earliest English cotillons which might help.

All but one of Gallini’s titles are French. The exception is La Graziosetta which is, presumably, Italian. The same is true for all the other early cotillons published in London, although Gherardi occasionally adds English versions, for example La Poison d’Avril or the April Fool.  Thomas Hurst who was insistent that his dances were ‘New English Cotillons’ nevertheless gave his titles first in French and then in English, as Le Moulinet. The Windmill and La Belle Angloise. The British Beauty.

There are a fair number of titles which include place names, perhaps hinting at the fashionable pastimes to be enjoyed there. Gallini has Les Amusements de Spa and Le Bois de Boulogne, among others. Gherardi is more inclined to London and its environs, for example Les Folies d’Ormond Street and Les Plaisirs de Tooting.

There are plenty of titles which are commonplaces, such as Gallini’s La Belle Paisanne and Les Quatre Saisons (Siret also has a cotillon entitled Les Quatre Saisons). It would be interesting to know how many of the cotillons that share a title also use the same music and, conversely, how many use the same music but have different titles. A few cotillons have titles that are the same as those of much earlier contredanses, for example Le Pistolet and La Pantomime (both in collections by music publishers). Are there any links between the dances or their music?

There are allusions to royalty, as in Gallini’s Le Prince de Galles and La Royale. There are also acknowledgements of other dancing masters. Gallini has Les Plaisirs de Carel, but his Le Rondeau de Fischer may refer to the composer and oboist Johann Christian Fischer who spent some time in London. Carel also features in the 1768 cotillon collection by the music publishers Thompson (La Carel and La Nouvelle Carel). Villeneuve includes the cotillon La Dubois in his collection.

There are, of course, many allusions to love, in keeping with the galanterie inseparable from the cotillon. Gallini has L’Amour Fidelle and L’Amour du Village as well as, less obviously, Les Plaisirs Enchantés and La Pouvoir de la Beauté. The cotillon mentioned to me was La Zone de Venus. The Figure goes as follows: 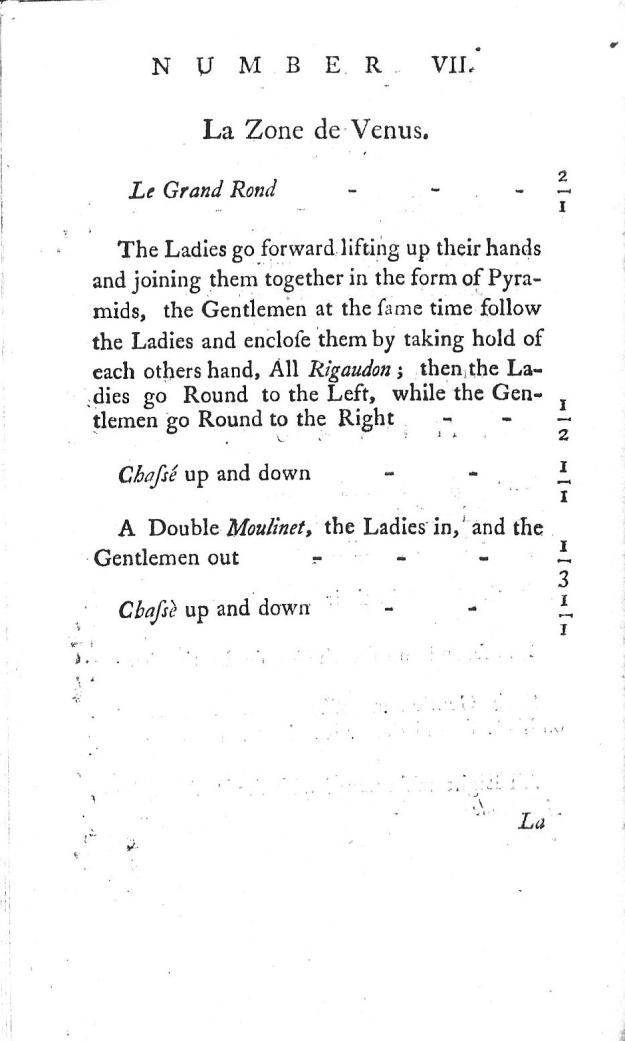 Is it intended to represent homage to Venus and to love? In the 18th century the ‘Zone’ of Venus was identified as her girdle or ‘Cestus’, which was decorated to encourage desire. There is a painting by Sir Joshua Reynolds entitled ‘Cupid untying the Zone of Venus’, which shows him undoing the ribbon around her waist. It seems that the ‘Cestus’ became an object of interest (if indeed it was not invented) during the early 1700s. So, was Gallini’s title innocently referring to youthful love or was it intended to be risqué?