There has been much debate, over many years, as to the identity of the first actress to appear on the London stage following the Restoration. Nobody seems to have bothered to ask who the first female professional dancer might have been. It is fair to point out that this is, probably, an even more impossible question to answer. There simply isn’t enough evidence to work with. There was stage dancing in London from at least as early as 1660, even before the arrival of Charles II to reclaim his throne. Who were the dancers? Were any of them professional dancers, as we understand the term? Were any of them female professional dancers? Mostly we don’t know.

Using The London Stage as the principal source of information, the first dancing to be reported for the period is Le Ballet de la Paix recorded in a printed scenario dated 1660. There are many questions surrounding this piece which, if it ever was performed, may have been given in London during spring 1660 just before the King’s restoration. However, there are no hints as to who may have danced in it. During the years immediately following the Restoration, all the reports on dancing in London’s theatres come from the diary of Samuel Pepys. They are quoted in The London Stage. His earliest mention dates to 5 February 1661, when he saw Glapthorne’s Argalus and Parthenia (a pre-Restoration drama) which was ‘pleasant for the dancing and singing’. Presumably the cast danced and sang, but we don’t know who they were.

Pepys’s first reference to a particular dancer came when he saw Davenant’s The Law against Lovers (an adaptation from Shakespeare) at Lincoln’s Inn Fields on 18 February 1662 and commended ‘the little girl’s (whom I never saw act before) dancing and singing’. She was probably Mary or ‘Moll’ Davis, whom Pepys would subsequently mention quite often. Around 18 months later, he took note of Winifred Gosnell in Davenant’s The Rivals at Lincoln’s Inn Fields on 10 September 1664, remarking ‘Gosnell comes and sings and dances finely’. Of course, both were first and foremost actresses and cannot be described as professional dancers, at least not according to 21st -century ideas.

Moll Davis apparently began her stage career in 1660. John Downes, prompter at Lincoln’s Inn Fields from the 1660s and author of Roscius Anglicanus, or an Historical Review of the Stage published in 1708, named her as one of Sir William Davenant’s four ‘Principal Actresses’ whom ‘he boarded at his own House’ when he formed his company. Some years later, in a diary entry for 11 January 1668, Pepys reports the opinion of ‘Pierce’ who said of Moll ‘she is a most homely jade as ever she saw, though she dances beyond anything in the world’. As I mentioned in another post, Pepys thought ‘little Mis Davis’ a far better dancer than Nell Gwyn. Like her more famous counterpart, Moll Davis left the stage in 1668 after becoming yet another of Charles II’s mistresses. The poet Richard Flecknoe wrote ‘To Mis: Davies, on her excellent dancing’, publishing his verses in Epigrams of all Sorts in 1669.

Dear Mis: delight of all the nobler sort,

Pride of the Stage and darling of the Court,

Who wou’d not think to see thee dance so light,

Thou wer’t all air? Or else all soul and spirit?

Or who’d not say to see thee only tread,

Thy feet were feathers! others feet but lead?

But none e’er moved more gracefully than thee;

And Circe charm’d with wand and magick lore,

But none, like thee, e’er charm’d with Feet before.

Thou Miracle! Whom all men must admire

To thy perfection, must not dance but fly.

Who trained Moll Davis to achieve a style and technique that was so much admired?

Pepys first met Winifred Gosnell in 1662. His diary entry for 12 November that year describes her as ‘pretty handsome’ and ‘with a good voice and sings very well’. Some days later, he commented that she ‘dances finely’. Miss Gosnell became, very briefly, companion to Mrs Pepys and only later joined the Duke’s Company as an actress. I have mentioned elsewhere Pepys’s reaction to her singing and dancing in Davenant’s The Rivals in 1663. Her stage career seems to have lasted until at least the 1680s, but when she petitioned the Lord Chamberlain about her discharge from the company she described herself as a singer rather than a dancer or even an actress.

So, the player with the best claim to be the first female professional dancer on the Restoration stage is Moll Davis. If she does not quite fit our definition of a ‘professional dancer’ she seems to have had the skills to be accepted as one. 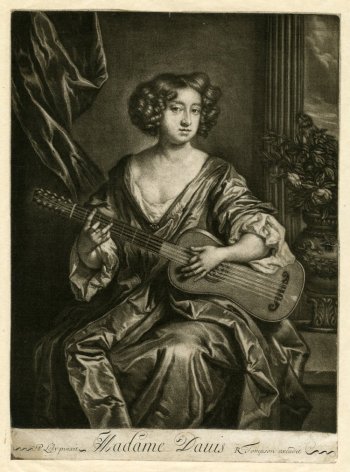 Moll Davis. Engraving by Richard Tompson after a painting by Sir Peter Lely, 1675-1690.