What was a ballet in early 18th-century London? The definition I work with is a stage work in which the narrative is told through dance, mime and music only, with no words. This describes John Weaver’s intention, although he called his stage works dramatic entertainments of dancing not ballets. For the purposes of this post, I will draw on that definition while concentrating on dancing at the Covent Garden Theatre from its opening on 7 December 1732 to the first performance of Pygmalion on 14 January 1734.

I’ll begin by looking more closely at Pygmalion. It is now attributed to the ballerina Marie Sallé, who took the role of the Statue Galatea. Her creations for the London stage were much applauded in Paris, where she was known as a dancer at the Académie Royale de Musique (the Paris Opéra). A description of Pygmalion was published in the Mercure de France for April 1734, in the form of a letter from London dated 15 March – by which date the ballet had been performed at least fourteen times, demonstrating its success with London audiences. The dance historian Cyril Beaumont published a translation of the letter in his Three French Dancers of the 18th Century in 1934. The ballet itself is described thus:

‘Pygmalion enters his studio accompanied by his sculptors, who execute a characteristic dance, mallet and chisel in hand. Pygmalion bids them throw open the back of the studio which, like the forepart, is adorned with statues. One in the middle stands out above all the others and attracts the admiration of everyone. Pygmalion examines it, considers it, and sighs. He puts his hands on the feet, then on the body; he examines all the contours, likewise the arms, which he adorns with precious bracelets. He places a rich necklace around the neck and kisses the hands of his beloved statue. At last he becomes enraptured with it; he displays signs of unrest and falls into a reverie, then prays to Venus and beseeches her to endow the marble with life.

Venus heeds his prayer; three rays of light appear, and, to the surprise of Pygmalion and his followers, the statue, to suitable music, gradually emerges from its insensibility; she expresses astonishment at her new existence and at all the objects which surround her.

Pygmalion, amazed and transported, holds out his hand for her to step from her position; she tests the ground, as it were, and gradually steps into the most elegant poses that a sculptor could desire. Pygmalion dances in front of her as if to teach her to dance. She repeats after him the simplest as well as the most difficult and complicated steps; he endeavours to inspire her with the love which he feels, and succeeds.’

Pygmalion was always given as an entr’acte entertainment, never as an afterpiece, and (apart from calling it ‘new’ at its first performances) the advertisements drew no particular attention to it. It is never called a ‘ballet’.

The account of the action suggests that it began with a group dance by the Sculptors, followed by an extended mime sequence for Pygmalion. There was a little bit of scenic business (as Venus ‘heeds his prayer’) and then a mime sequence by the Statue, Galatea, followed by solos and a duet for her and her creator. The whole piece is essentially a single scene. It draws on a number of antecedents, one of which is indicated by Gregorio Lambranzi in his Neue unde Curieuse Theatrialische Tantz-Schul of 1716 in a plate showing sculptors at work (part 2, plate 24). 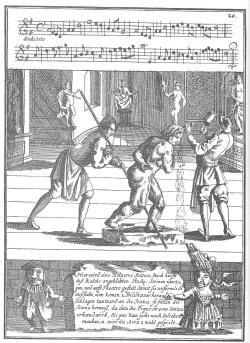 The dancers at Covent Garden were Malter and Mlle Sallé, who performed as Pygmalion and Galatea, together with Dupré, Pelling, Duke, Le Sac, Newhouse and Delagarde, all regular members of Rich’s company.

What earlier entertainments at the new theatre might be classed as ballets? There are three contenders: The Sleeping Dutchman and his Frow given 27 March 1733; The Amorous Clown; or, The Courtizan given 3 May 1733; The Cobler; or, The Merry Wife Constant given 4 May 1733. All were performed by a principal couple with a group of supporting dancers and their titles suggest a narrative with action conveyed through dance and mime. All three pieces were created for benefit performances and only The Sleeping Dutchman and his Frow was given more than once.

The Cobler; or, The Merry Wife Constant can also be associated with a dance recorded by Lambranzi, who shows a Cobbler ‘with the tools of his trade, the use of which he expresses in mime’ before he is joined by his wife and the two dance together (part 2, plates 29, 30). 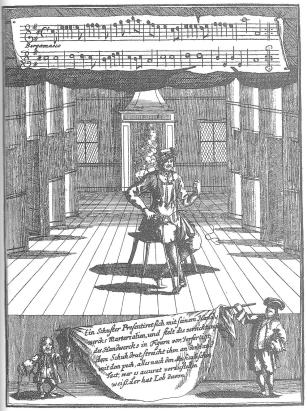 This entr’acte dance has a cast list which pairs the characters with commedia dell’arte characters (the Cobler is Punch, but the ‘Merry Wife’ has no counterpart), an idea used in some of Rich’s pantomime afterpieces. This suggests expressive action drawn from the commedia dell’arte, which by this period was common on the London stage. The Cobler; or, The Merry Wife Constant was probably created by Newhouse, who danced the Cobbler, for his own benefit.

The other two pieces involved Francis Nivelon, who was Rich’s leading dancer and probably the dancing master at Covent Garden. He shared a background in French fair theatre with Marie Sallé. The Sleeping Dutchman and his Frow was created for Nivelon’s own benefit and he and Mrs Laguerre took the title roles. She was Rich’s leading English female dancer, with skills that allowed her to take over some of Marie Sallé’s pantomime roles notably Daphne and Flora in Apollo and Daphne. Mrs Laguerre was also an actress, albeit a minor one. They were supported by Newhouse, Pelling, Le Sac, Delagarde, Miss La Tour, Mrs Pelling, Mrs Ogden and Miss Baston. The men would all appear in Pygmalion the following season.

The Amorous Clown; or, the Courtizan has the strongest claim to be considered a ballet. It was given right at the end of the performance, following the afterpiece, suggesting that it was a more substantial piece. It was created for the benefit of Dupré and Mrs Pelling, probably by Nivelon for the cast list had ‘Clowns by Nivelon and Pelling; Wives by Miss Latour and Mrs Ogden; Courtizan – Mrs Pelling’. In this context a ‘Clown’ was an unsophisticated Countryman or Rustic. The title suggests that the piece centred on Nivelon and Mrs Pelling and contained mime sequences as well as dances.  Mrs Pelling, like Mrs Laguerre, had skills that extended to serious dance and allowed her, too, to take over some of Marie Sallé’s pantomime roles.

These dance pieces have been overlooked by dance historians because they had very limited stage lives and were never noticed in the newspapers or elsewhere (it is worth recalling that Pygmalion received little attention in the British newspapers). Unlike Pygmalion, we have no accounts of their action. All three are comic rather than serious (although one or more of them may well have included some serious dancing). They make no use of the classical mythology used as a yardstick for the importance of dance works by so many 20th-century dance writers. Despite all that, I suggest that Pygmalion was not the first ballet given at the new Covent Garden playhouse – that honour should arguably go to The Amorous Clown; or, the Courtizan. Marie Sallé’s ballet was created within, and as a result of, the rich and varied repertoire of dancing (which included many such small ballets, serious as well as comic) in London’s theatres during the early 1700s.