In my post exploring who may have performed the Cyclops in John Weaver’s The Loves of Mars and Venus, I promised to take a closer look at the Miller’s Dance occasionally given among the entr’acte entertainments in London’s theatres. Apart from trying to shed more light on the performances within Weaver’s dance drama, I’ll investigate whether it is possible to get some idea of the dancing within those pieces for which we know little other than the title and names of the performers.

Dances with the word ‘Miller’ in the title were given on the London stage from at least the first decade of the 18th century into the 1760s. For reasons as yet unclear (but probably to do with individual performers), they seem to have disappeared from the repertoire between the mid-1710s and early 1720s and for most of the 1730s. In this post, I will concentrate on the earliest period – from around 1703-1704 to 1715-1716. These are the dances in which some of the ‘Comedians’ who may have danced the Cyclops appeared.

The earliest Miller’s Dance recorded in advertisements is a solo given by William Pinkethman at Drury Lane on 5 June 1704, which he repeated on 10 August. There is nothing to indicate the music or the nature of the dance. A few seasons later, on 26 December 1707 also at Drury Lane, the advertisement specified that the dancing would include ‘an old English Dance call’d, Miller’s Dance’. This might suggest the use of a familiar tune and could, perhaps, link the dance to Miller’s Jig first published in the 7th edition of John Playford’s The Dancing Master in 1686. This tune appeared in every subsequent edition up to the 18th around 1728, so it must have been well known. Only three dancers were billed in the entr’actes that evening, so it seems the Miller’s Dance couldn’t have been a country dance. It is possible that Pinkethman reprised his solo, since he gave an ‘Equi-vocal Epilogue after the old English manner’ for the main play that same evening.

The third dance was the Whimsical Dance between a Miller, his Wife, and a Town Miss, first given at Pinkethman’s Greenwich theatre on 5 August 1710 and repeated at five more performances before the end of the summer season there. The only performer billed for this trio was Leigh as the Miller’s Wife. In 1714-1715 and again in 1715-1716 a Miller’s Dance was given at Lincoln’s Inn Fields by James Spiller, his wife Elizabeth and Leigh. Could this have been the Whimsical Dance of a few years earlier? Elizabeth Spiller performed with the Greenwich company in 1709-1710 and her husband may well have done so too. The title Whimsical Dance between a Miller, his Wife, and a Town Miss suggests some characterisation and comic action, including the low comedy associated with a cross-dressed Miller’s Wife. Spiller was adept at playing old men (in 1710 he was, apparently, only 18) and he presumably danced the Miller. Hogarth’s benefit ticket shows him some 10 years later. 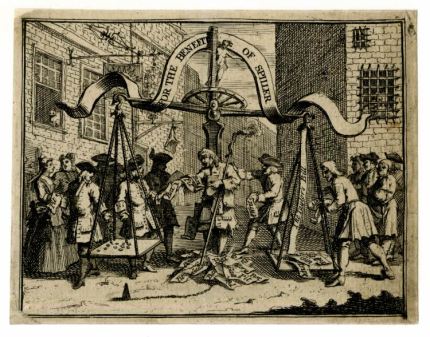 Despite these clues, there is no way of knowing what any of these Miller’s Dances were like. No music survives for any of them. The dancing would surely have been the antithesis of la belle danse, although it is unlikely to have had its own vocabulary of steps.

How did audiences recognise that it was a ‘Miller’s Dance’? Was the advertisement of the title in the evening’s bill enough? Was the dance familiar from earlier (but unrecorded) performances? Were there very obvious mimed actions? Did the music provide a strong clue? The dance is likely to have been performed against whatever scenery was in place for that evening’s play, which might even have conflicted with the piece on offer. There are many things we simply don’t know about entr’acte dancing on the London stage in the 18th century.

Neither Weaver’s scenario nor the advertisements for the first performances of The Loves of Mars and Venus tell us who played the Cyclops, Vulcan’s Workmen. It was only on 12 March and the fourth performance of the ballet that the bills announced ‘4 Cyclops by the Comedians’ (Weaver’s scenario calls for seven Cyclops in all). Weaver does not give the Cyclops individual names, although these were used elsewhere including the masque by Motteux that was his main source.

The billing ‘the Comedians’ suggests that audiences would have known which players would take the roles. The Drury Lane company had 25 actors for the 1716-1717 season, including a number who specialised in comedy – several of whom occasionally danced. The cast for Weaver’s ‘Entertainment of Dancing in Grotesque Characters’ The Shipwreck; or, Perseus and Andromeda included ‘Four Sailors and Wives by the Comedians’. This tells us that there were four (and perhaps, if the ‘Wives’ were played by men, eight) players who might have appeared as Cyclops in Weaver’s ballet. The billing also suggests that the Comedians had been popular enough in The Loves of Mars and Venus for Weaver to be happy to use the idea in a fresh context. Who could these ‘Comedians’ have been?

Most obvious among them is William Pinkethman, who was probably the leading low comedian at Drury Lane during this period. Primarily an actor, Pinkethman sometimes sang and danced. He regularly ran a booth at London’s summer fairs and also managed a theatre during the summer months, first at Greenwich and then at Richmond. His repertoire included Harlequin in Aphra Behn’s The Emperor of the Moon, a role he took early in the 18th century. This indicates that he had physical skills that were akin to dancing. He often appeared with the comic actor William Bullock (who was a member of John Rich’s troupe at Lincoln’s Inn Fields in 1716-1717). Their respective talents were described in 1709 in an issue of the Tatler.

‘Mr. William Bullock and Mr. William Penkethman are of the same age, profession, and sex. They both distinguish themselves in a very particular manner … Mr. Bullock has the more agreeable sqwal, and Mr. Penkethman the more graceful shrug. Penkethman devours a cold chicken with great applause. Bullock’s talent lies chiefly in asparagus. Penkethman is very dexterous at conveying himself under a table. Bullock is no less active at jumping over a stick.’

The description gives us an idea of the stock in trade of the London stage’s low comedians and suggests something of the physical comedy Pinkethman might have brought to the role of a Cyclops. He is one of the few actors of the period for whom we have a portrait.

Another comedian at Drury Lane in 1716-1717 was Henry Norris, who often worked with Pinkethman at the fairs and in the latter’s summer theatres. Norris had begun his career by the mid-1690s, perhaps in Dublin. He had arrived in London for the 1699-1700 season, when he played at Drury Lane. Like Pinkethman, he was a comic actor who occasionally sang and danced and quite often managed a booth at the fairs. He, too, was noted for his expressive skills, as a discussion of his appearance in the afterpiece The Country Wake in the Tatler in 1712 reveals:

‘I am confident, were there a scene written wherein Penkethman should break his leg by wrestling with Bullock, and Dicky [i.e. Henry Norris] come in to set it, without one word said but what should be according to the exact rules of surgery in making this extension, and binding up the leg, the whole house should be in a roar of applause at the dissembled anguish of the patient, the help given by him who threw him down, and the handy address and arch looks of the surgeon.’

Such skills and such interplay must surely have been put to good use in the scenes involving the Cyclops.

Also at Drury Lane at this period was the comedian Francis Leigh, who had begun his career in the early 1700s. He later worked with Pinkethman at Greenwich as well as running a fair booth with Norris during the summer. Leigh occasionally danced, although the only piece in which he was explicitly billed was a Miller’s Dance (in which he apparently sometimes appeared as the Miller’s Wife – I will take a closer look at the various versions of this entr’acte dance in due course). Sadly, there is no known portrait of Leigh and no description of him in performance. However, his close association with both Pinkethman and Norris suggests compatible skills.

The fourth comedian at Drury Lane who may have played one of the Cyclops was Josias Miller, who had begun his career around 1704. Like the others I have mentioned, he was a comic actor who occasionally sang and danced (he later took non-speaking roles in some of Drury Lane’s most successful pantomimes). There are a couple of depictions of Miller as different characters, but no description of him in performance.

Josias Miller, as Teague in Sir Robert Howard’s The Committee. Mezzotint by Andrew Miller after a painting by Charles Stoppelaer, 1739. © British Museum

More research may uncover further information about the performance styles of these four comedians, perhaps shedding light on how they may have played the Cyclops in The Loves of Mars and Venus. Dancing skills were obviously not the point of their appearances in the ballet. They were surely there to make the audience laugh at their antics as they mimed their way through their actions as blacksmiths and responded to the orders of their master, Vulcan.

Henry Gissey, Design for a Cyclops in the tragédie-ballet Psyché , 1671