In my last post about the pas de Zephyr, I suggested that there were four contenders for the professional male dancer who may have originated the step or the enchainement from which the social dance step took its name – André Deshayes, Louis Duport, Charles-Louis Didelot and Monsieur Albert. As I also said, there are a number of issues to consider as I try to answer the question of who was responsible, if the pas de Zephyr can indeed be traced to a single dancer.

There are at least six descriptions of the step in social dance manuals. Three of these are English – Payne (1818), Strathy (1822) and Mason (1827). Two are French – Gourdoux-Daux (1823) and Albert (1834). One is Italian – Costa (1831). It is interesting that there are a number of English treatises, although it seems likely that the earliest description of the pas de Zephyr is in fact French. It could have appeared in either the first treatise by Gourdoux Daux, Principes et notions élémentaires sur l’art de la danse published in 1804, or its second edition published in 1811, neither of which I have yet been able to consult. However, might the inclusion of the step in English treatises suggest that the dancer (whoever he was) also appeared as Zephyr on the London stage?

All the treatises are, of course, for amateurs and dancing in the ballroom. Apart from the fact that the stage version of the pas de Zephyr would have had to be simplified for performance by amateur dancers, there is also the question of appropriate style. Strathy devotes much space to the variations appropriate for what he calls ‘Balancer, or to Set to your Partner’ (for which his recommended steps include the pas de Zephyr). Before he does so, he emphasises the importance of a ‘gliding smoothness of execution’, however difficult the steps. Strathy also refers to ‘that easy, dignified and engaging manner, which never fails to distinguish a polite person’ and ‘the importance of a genteel and prepossessing deportment of the person’. In the early 19th-century ballroom, style was as important as technique and the latter should never undermine the former.

So, there are at least three issues to consider in identifying the dancer responsible for inspiring the addition of the pas de Zephyr to those steps deemed suitable for the ballroom. The first is the period during which each dancer appeared as Zephyr, which must allow time for the stage step to be seen, admired, transformed and adopted in the ballroom before it was recorded in treatises. The second is whether the dancer appeared in both London and Paris. The third is the dancer’s performance style and how it interacted with their virtuosity (all four dancers were highly technically accomplished).

At this point, I think it is possible to discount Didelot, at least as a performer. Although he spent much of his earlier career in London, he appeared relatively little in Paris. He was the eldest of the four dancers by some years, and so is perhaps less likely to have influenced dancing masters around 1800. In any case, his style (that of a demi-caractère dancer) would not have recommended itself to teachers of social dancing. On the other hand, he did create Zéphire et Flore – the most famous of the Zephyr ballets – which may have been a work within which the pas de Zephyr drew particular attention.

Monsieur Albert almost certainly appeared too late to be the originator of the pas de Zephyr, since he was only engaged at the Paris Opéra from 1808 and did not dance in London until the 1820s. His style was undoubtedly worth emulating, so perhaps he contributed to the continued popularity of the pas de Zephyr in the ballroom.

It seems to me that the two dancers most likely to have caught the imagination of audiences with their versions of the pas de Zephyr are André Deshayes and Louis Duport. Both were closely identified with the role of Zephyr and both appeared in London as well as Paris. Deshayes spent more time in London, whereas Duport was more famous in Paris. Deshayes was as famed for his style as his virtuosity, which made him a model for aspirant ballroom dancers. Duport allowed his legendary skill to run away with him on many occasions, which must have made his tours de force hard to forget. So, could they each have contributed towards the adoption of this step in their different ways? The watercolour in which both dancers have been separately identified underlines the difficulty of choosing between them. 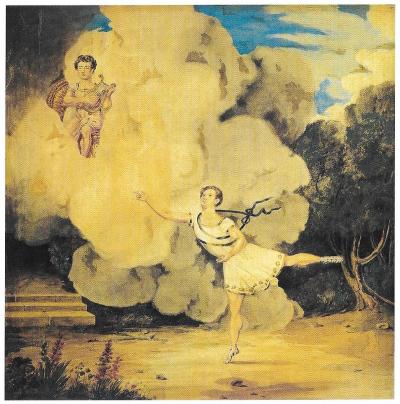 If I have to choose, I would settle on Deshayes – for his style as much as for his fame as Zephyr. However, perhaps what really mattered were the various Zephyr ballets, irrespective of who danced the title role. The vocabulary deployed by all four men, and indeed other dancers who played Zephyr, probably made use of a similar range of steps intended to make the danseur noble appear to fly. Who would not want to feel as if they were as elegantly airborne when dancing as one of the ballet’s great stars, even within the confines of the ballroom?

In my search for the source of the social dance step the pas de Zephyr, I looked briefly at the ballets featuring the character Zephyr from the 1640s to the 1810s. As the step apparently first appears in early 19th-century dance manuals, it makes most sense to focus on ballets from the 1790s to the early 1800s. Who among the leading male dancers of that time might have performed the step or enchainement that inspired the pas de Zephyr?

There are just a handful of candidates. In Gardel’s Psyché (Paris, 1790), Zephyr was created by Louis Laborie but danced in later revivals by André Deshayes, Louis-Antoine Duport and Monsieur Albert. Deshayes may have danced as Zephyr in Gardel’s Le Jugement de Paris (Paris, 1793). He certainly took the title role in Gardel’s Le Retour de Zéphire (Paris, 1802). In 1806, Duport created his own divertissement L’Hymen de Zéphire, ou Le Volage fixé giving himself the title role. Didelot danced Zephyr in his own Zéphire et Flore (London, 1796). When the ballet was finally given in Paris in 1815, Albert appeared as Zephyr. So, there are four main contenders – André Deshayes, Louis-Antoine Duport, Charles-Louis Didelot and Monsieur Albert, for all of whom Zephyr was a significant role.

A watercolour of the early 1800s is widely agreed to depict a male dancer as Zephyr, although he has been variously identified as Deshayes and Duport. 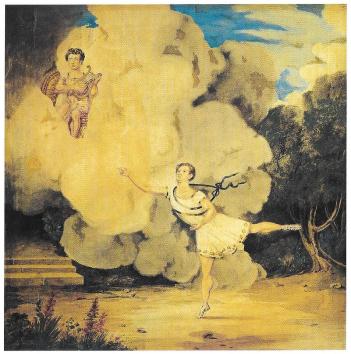 André Deshayes (1777-1846) trained as a dancer at the Paris Opéra school, joining the company in 1794 and becoming a principal dancer in 1795. Deshayes danced in London in 1800 and again from 1804 to 1811. His success in Gardel’s Psyché was such that the choreographer created the one-act divertissement Le Retour de Zéphire specially for him. The piece was intended to celebrate the return of Deshayes to the stage following a long absence due to injury. His dancing was described in the review accorded Gardel’s ballet in the Mercure de France for 3 March 1802:

‘And let us not forget Zephyr himself, the god of the festivity, whose slender figure, interesting features and graceful movements delight the audience, and who, through the elegance of his attitudes and smoothness of his dancing, seems to make up for what he lacks perhaps in strength.’ (Translation by Ivor Guest in his Ballet under Napoleon).

Deshayes returned to London again in 1821, as a choreographer as well as a dancer, staying there until his retirement in 1842.

Louis Duport (1781 or 1783-1853) made his debut at the Paris Opéra in 1797, quickly becoming one of the company’s leading dancers. He did not come to London until 1819, making just the one visit before he retired from the stage in 1820. Duport seems to have made a speciality of the role of Zephyr. Apart from his appearances in Gardel’s Psyché and his own L’Hymen de Zéphire, he also danced the role in Gardel’s Le Retour de Zéphire in Paris in 1803 as well as in Didelot’s Zéphire et Flore when that ballet was given in St. Petersburg in 1808. In the context of this post, ‘Le Pas de Zéphir, de M. Duport’ advertised, apparently as a solo, as part of a performance given in 1816 by the Casorti family, is of particular interest. 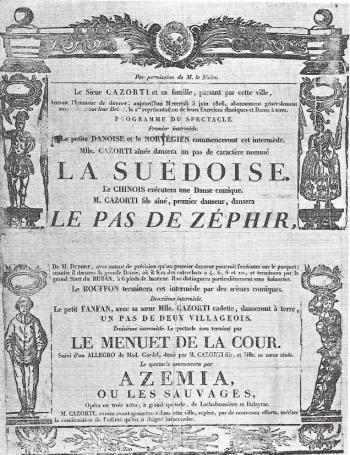 The poster is reproduced in Marian Hannah Winter, The Pre-Romantic Ballet

Duport’s dancing as Zephyr was hailed by one critic as ‘the Zephyr depicted by the poets, barely touching the ground in his rapid flight’. The writer went on to praise:

‘The suppleness of his movements, his precision in the most difficult steps, the unbelievable boldness of his pirouettes, in which Duport has perhaps no equal for the perfection and finish of their execution …’ (Translation by Ivor Guest in his Ballet under Napoleon)

Duport was famed for taking virtuosity to new extremes.

Charles-Louis Didelot (1767-1837) belonged to an earlier generation. Born in Stockholm, where he received his earliest training, by 1776 he was studying in Paris with leading teachers. Although he began dancing at the Paris Opéra as early as 1783, Didelot did not make his official debut there until 1791. Before then, he had danced in Stockholm, London and Bordeaux. He returned to London, as both choreographer and dancer, from 1796 to 1801 and again from 1811 to 1816. He had spent the intervening years in St Petersburg, returning there in 1816 and remaining for the rest of his career. Didelot was a demi-caractère rather than a serious dancer, lacking the elegant physique required of the latter, although the role he created in his own Zéphire et Flore would become a vehicle for leading danseurs nobles.

Monsieur Albert (François Decombe, 1787-1865) was engaged to dance at the Paris Opéra from 1808, dancing Zephyr in Didelot’s Flore et Zéphire when the ballet was first given in Paris in 1815. During the 1820s he danced at London’s King’s Theatre, where his first major work Cendrillon was given in 1822. Albert danced as the prince, a role he repeated when the ballet was given at the Paris Opéra the following year. He was also a teacher, with a reputation for improving the training of those destined to be professional dancers as technical demands changed. Albert taught amateurs as well as professionals – his L’art de la danse à la ville et à la cour was published in Paris in 1834. He included the pas de Zephyr among the steps he suggested for the quadrille, in a version very different from all the others. Albert’s pas de Zephyr is an enchainement not a single step and he does not include the beat around the ankle which is a feature of some other versions. Albert’s dancing was described by his much younger contemporary Auguste Bournonville:

‘The word “gentlemanlike” fully decribes Albert’s demeanour as a dancer: noble, vigorous, gallant, modest, ardent, friendly, gay, but seldom inspired. He won the applause of the connoisseurs but failed to move the masses …’ (Translation by Patricia MacAndrew in her edition of Bournonville’s My Theatre Life) 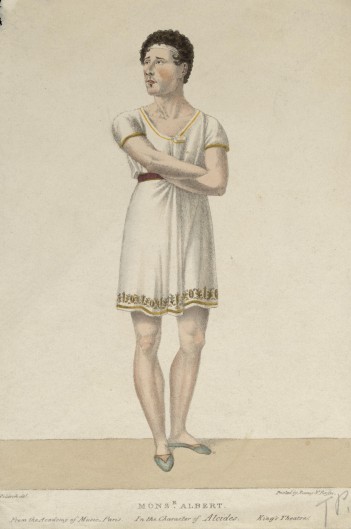 Print after F. Waldek. Monsieur Albert in the role of Alcide (London, 1821)

So, which of these male stars of the dance created the pas de Zephyr – if indeed any of them did? The answer to this question raises a few more issues, which I will explore in my next post as I weigh up the evidence.