In my last post about the four French notated menuets à quatre, I promised to look at the figures. How do these differ between the choreographies? Where are they the same? How do they relate to the ballroom menuet à deux? These are just some of the questions to be asked.

An obvious first question is – how do each of these minuets for four begin? Presumably they all open with a révérence, although none of the notations show this. Perhaps the révérence took the same form as in the minuet for a couple, who honour the presence and then each other. In the case of the menuet à quatre, the first honour would therefore be to the facing couple. Or were the honours reversed, as they are in the later quadrille, so the first révérence is to your own partner and the second to your opposite? In any case, all four dances begin with the two couples facing each other.

Only two of the dances begin in the same way. The very first plates of the 1706 Menuet à Quatre and the 1751 Menuet aquatre figuret show the dancers performing two pas de menuet forwards and two backwards. In his Menuet à Quatre of c1713, Pecour has his couples moving sideways to the left, moving forwards to cross (right shoulders) on a diagonal and curling round to face one another again. His figure is an obvious allusion to the ‘Z’ figure of the ballroom minuet. Although the ‘Z’ figure is also referenced in the other choreographies, Pecour’s version in this dance is the most straightforward. Dezais begins La Carignan with a contredanse figure, in which each dancer casts out and then changes places with their partner.

How do these dances end? In both his Menuet à Quatre of c1713 and his Menuet aquatre figuret, Pecour has his dancers moving forwards and then backwards to end in a final révérence. In the earlier dance, they balancé forwards and back, do two pas de menuet backwards and their final coupé soutenue (which is on opposite feet) brings them together. His later choreography is simpler. The dancers do two pas de menuet forwards, one backwards and also move towards one another on the final coupé soutenue. The 1706 Menuet à Quatre has the dancers, in couples, taking inside hands and crossing (left shoulders) on a diagonal before sweeping around to return to place for the final révérence. The figure alludes to the minuet’s ‘Z’ figure but seems closer to a contredanse figure. Dezais draws on the final figure of the ballroom minuet, with his couples each taking both hands to end La Carignan, although they do so for only one pas de menuet before letting go with their outside hands for one pas de menuet forwards and one backwards before the final step into the révérence.

Taking right hands, taking left hands and taking both hands all feature in these dances for four, but transmuted into their contredanse counterparts. The 1706 Menuet à Quatre has a right hand and a left hand moulinet as well as a rond with all the dancers holding hands. Pecour’s c1713 Menuet à Quatre adds variations when taking right and left hands, for the ladies have to wait for the opposite man to cross the set to take right hands  and the men then have to wait for their partners to do the same before taking left hands. The plate for the rond shows the dancers only taking inside hands with their opposite, although each couple ends in their original place. Apart from briefly taking both hands in the final figure, Dezais’s dancers do only a right hand moulinet. He dispenses entirely with any equivalent of taking left hands.

In his Menuet aquatre figuret, Pecour runs through all the various permutations on taking hands, but this dance is a cotillon so perhaps they should be seen as changes and not as minuet figures at all. Working in couples, his dancers take right hands then left hands. After a repeat of the figure, they take both hands to move first clockwise and then anti-clockwise. The notation then has another circling figure, with a notation for taking hands that I have not seen before and cannot readily interpret. 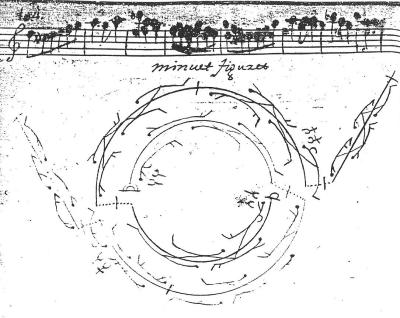 Are the couples holding hands behind their backs or could this be an allemande hold? The notation for the latter is quite different in Pecour’s L’Allemande of 1702, the dance in which the hold was first recorded. 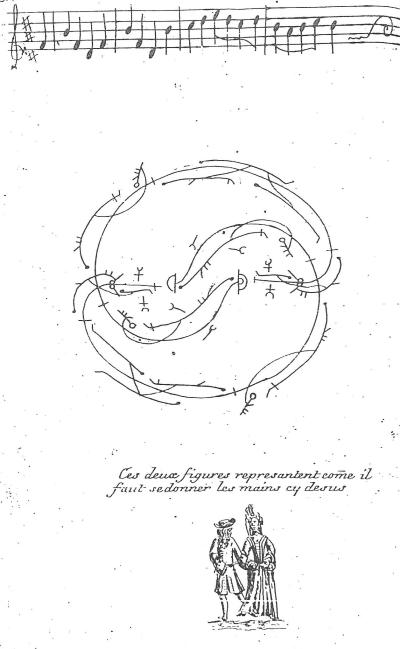 None of the choreographers of these minuets for four entirely loses sight of the ballroom minuet for a couple, but all have more than half an eye on contredanse figures. On the evidence of these notations, the menuet à quatre retained the challenge of the pas de menuet, but put it in a context that relinquished the ordeal of scrutiny by the assembled company in favour of the relaxed pleasure of dancing with them.