I keep coming across references to sarabands in plays from the Restoration period. I am wondering why this dance was popular at this period. I have previously written about the saraband as an entr’acte dance in London’s theatres during the early 18th century, but here I will look a little further back.

My research into dancing on the London stage only goes back to 1660 and a little before. The earliest mention of a saraband I have encountered appears in Sir William Davenant’s The Cruelty of the Spaniards in Peru, first performed in 1658. The entertainment has six Entries, each of which ends with a dance.  In the fourth Entry:

‘… a saraband is played, whilst two Spaniards enter from the opposite sides of the scene, exactly clothed and armed according to the custom of their nation and, to express their triumph after the victory over the natives, they solemnly uncloak and unarm themselves to the tune and afterwards dance with castanets.’

Davenant’s The Law against Lovers (a conflation and adaptation of Shakespeare’s Measure for Measure and Much Ado About Nothing) was seen by Samuel Pepys on 18 February 1662, when he noted ‘the little girl’s (whom I never saw before) dancing and singing’. She was Mary (‘Moll’) Davis, who played Viola in Davenant’s play and is described in the text as ‘dancing a Saraband awhile with Castanietos’.

Did John Dryden draw on one or the other (or both) of these for the scene in his The Indian Emperor in which two Spaniards ‘dance a Saraband with Castanieta’s’? The Indian Emperor was first performed in 1665 and published in 1668. The dance comes near the beginning of act four scene three. Here is the description from the second edition of 1668 (coincidentally the year the play was performed at the court of Charles II). 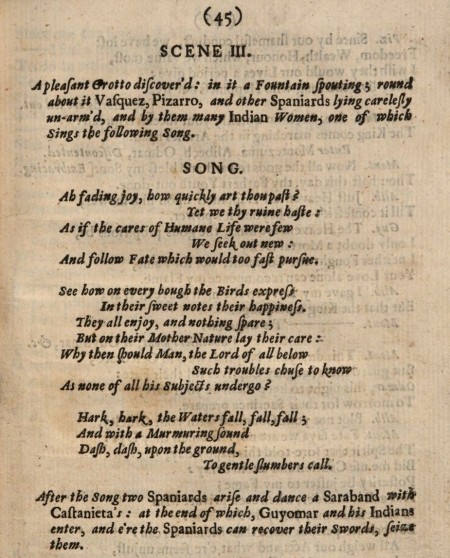 The context for the dance, with its unarmed Spaniards, is strikingly similar to Davenant’s in The Cruelty of the Spaniards in Peru.

Here is a Spaniard dancing with castanets from a much earlier work. Might he have influenced the dancing seen on the London stage?

I was prompted to write this post by the discovery of yet another saraband performed in a play. Shakespeare’s The Tempest was adapted by Davenant and Dryden and, in their new version, first performed in 1667. I won’t go into all the details of the adaptation here but, among other additional characters, Ariel was given a companion female spirit named Milcha. At the end of the play, just before Prospero’s final speech, Ariel and Milcha dance a saraband together.  It is worth noting that Ariel may originally have been performed by Mary Davis.

I am aware, of course, of the ‘sarabands’ in The English Dancing-Master published by John Playford in 1651. Further afield, there are the appearances by Mlle Verpré in the ballets de cour of Louis XIV, as ‘L’Espagnolle … dansant avec Castagnettes’ in the final Entrée of the Ballet de la Raillerie (1659) and ‘dansant une Sarabande’ in the seventh Entrée of the Ballet des Saisons (1661). The saraband appears most notably in the ‘Ballet des Nations’ within Le Bourgeois gentilhomme in 1670, which just postdates the period I have been concentrating on. Research among the music sources of the period would doubtless reveal many more examples of this dance, with and without castanets.

What were the reasons for Davenant’s and Dryden’s repeated use of the saraband in their plays? How would their audiences have seen and interpreted this dance? It isn’t difficult to see, with these examples, that on the early Restoration stage the saraband was often closely linked to Spanish characters, but is there more to its use than simply the Spanish connection? Further research, in both earlier and later periods, could well uncover a far richer picture and perhaps reveal more about dancing in London’s theatres during the 1660s and 1670s.

1 thought on “The Saraband on the Restoration Stage”