In an earlier post, Jumping or Rising? Regency Quadrille Steps, I admitted that I had found it difficult to learn the step sequences used for the various quadrille figures in Strathy’s Elements of the art of dancing (1822) and Gourdoux-Daux’s Elements and principles of the art of dancing (translation, 1817). I’m still puzzling over the reasons for this. I’ve been dancing quadrilles for a good few years, admittedly using only a small range of steps, and my background in ballet (as well as my work on baroque dance) means that I can usually pick up step sequences quite quickly. So, in this post, I thought I would take a closer look at what made the new quadrille sequences so challenging.

I’ll begin with the upper body and the arms. Strathy advises:

‘The graceful display of the arms depends greatly on the manner in which the elbows and wrists are turned. The arms should be held in a rounded form, so that the elbows and wrists make the least appearance possible; the elbows turned forward in a small degree, and the wrists held in contrast with them; the hands gently rounded, and the thumbs placed on the joint, or rather over the first joint of the fore-finger, and turned towards the sides. In this position, the arms have a much more delicate appearance, than when the back of the hands are held foremost’.

The lady, of course, holds her skirt, and Strathy helpfully provides illustrations. 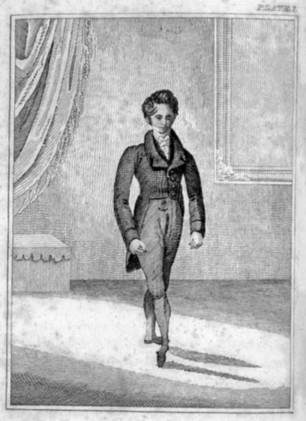 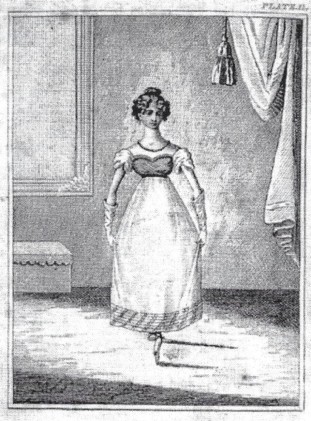 The arms are in what is nowadays called a bras bas position and this is where they stay, except when taking hands with another dancer in the quadrille set. Strathy places a lot of emphasis on the ‘proper deportment of the body’ and the ‘proper disposition of the waist’. It takes quite a lot of practice to control the upper body (including the head and the shoulders) and keep the arms still without becoming tense and looking stiff.

In my earlier post, I looked at whether regency dancers jumped or merely rose for their springing steps. With further experimentation, and advice from the dancing master who began this enquiry, I came to the conclusion that the answer was somewhere between the two and that some steps, for example the jeté, travel relatively little. This style of dancing is far more contained than modern ballet. Just as much as its baroque predecessor, it requires what Strathy calls ‘à-plomb,- that steadiness and facility of execution’ achieved by keeping the weight well over the feet.  At the end of each step, you must be ready to go in any direction (or none) – just as in baroque dance. I am beginning to master this, but it has taken quite a while.

My main struggles have been with the sequences used in regency quadrilles. As I tried, and failed, to learn these well enough to do them without repeatedly checking the notes, I attempted to analyse what was going on. I came to the conclusion that I was actually trying to replicate what was expected in modern ballet. I was just too used to sequences that were fully symmetrical as well balletic conventions for closing the working foot either ‘under’ or ‘over’. Baroque dance, of course, works differently but I’ve almost always been learning notated dances and not short step sequences.

I’ll give, as an example of how regency quadrille sequences work, one of Gourdoux-Daux’s alternatives for traverser – in which the dancer crosses the set to the other side. Most of us (myself included) generally use the sequence of three temps levé-chassé ending with a jeté and assemblé.  Here is what Gourdoux-Daux suggests (and this is only one of several alternatives offered by him and Strathy):

The description does need a bit of interpretation, but it is an asymmetric sequence and you have to get the correct foot in front at the end of each glissade as well as finishing your jeté and assemblés ‘under’. You also have to be ready to change orientation, as well as direction, immediately after dancing to the right side and the left. It has taken me a while to get it right.

Perhaps my problems also related to the fact that I was trying to learn several different sequences (for dos-à-dos, traverser, chassé croisé and dancing right and left) all at the same time, as well as having very little time for practice each week. I’m sure that it would have taken regency dancers some weeks of careful tuition by an expert dancing master before they became proficient. Still, never underestimate the skills of even amateur dancers in history!