I have been trying to get my feet around the steps and sequences used in regency quadrilles and finding it a bit of a struggle. I think there are two main reasons for this. One is that the ‘grammar’ of the sequences, the way in which the steps are put together, contradicts what I am used to in modern ballet’s petit allegro. The other is that the individual steps, which seem very similar to those of petit allegro, in fact need a different style and technique which I am still trying to work out.

I started to learn this material (in which I claim no expertise) for a project devised by a young teacher of historical dance with whom I have been lucky enough to work over several years. The source texts we are using are Strathy’s treatise of 1822 and the 1817 American translation of Gourdoux-Daux’s manual. 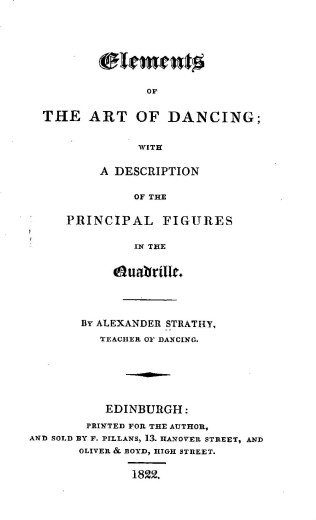 These provide descriptions of the temps levé, chassé, jeté, assemblé, échappé, glissade, sissonne, changement and grand coupé, which feature in the various quadrille figures and balances we have been exploring.

Looking through the two treatises, I was surprised to see that both use the word ‘rise’ where I expected to see ‘spring’ or ‘jump’. Gourdoux-Daux’s translator does use the word ‘jump’ occasionally and Strathy says ‘spring’ once, but the descriptions suggest that neither word really represents what they intended their dancers to do. When describing the landing from a step which I would assume (from my experience with ballet) leaves the floor, Strathy uses the word ‘fall’ while ‘V.G.’ says ‘alight’. I won’t go through all of the steps I have listed, but here are their descriptions of the changement, which I think illustrate the point I am grappling with.

Place the body as directed for the deportment, the feet in the fifth position; balance the body equally on both legs, bend low by folding the knees outward, rise without jerking, and make the feet pass by the first position, the one to the place of the other, the knees extended, and the points or toes turned down, so as the feet may be in a line with the legs, the points near the floor, where they will fall by the weight of the body: place the heels gently, the feet in the fifth position; keep the knees straight.’

‘On the motion called Change of Foot, in the third position.

To perform this step, place yourself in the third position, firm on the hips and knees, with the toes properly turned out. Bend down equally upon both knees and insteps, (without raising the heels from the floor) rise up gradually, just high enough to enable you to bend the instep so as to cause the toes to be in a perpendicular line with the leg, as much as possible. Cross your feet as in the first position, viz. the heels close together, and alighting on the floor on the toes, bring the heels gradually down in the third position and straighten up your knees.’

Both descriptions suggest a jump that isn’t quite a jump, since the dancer rises only high enough to fully point the feet. The motive force for the step seems to come from the feet as much as the plié, making it closer to the modern rélevé than a jump. So, in regency dancing, are jumps closer to the demi-jeté or perhaps the ‘relever en sautant dessus’ of the contretemps in baroque dance?

Another word that turns up regularly in these treatises is ‘slide’, used in the description of the assemblé (for the initial movement of the working foot) as well as in the glissade (which is obviously linked to the baroque step with its pas glissés). A sliding step does not, of course, leave the floor.

For another project, I have been re-reading a study of balls and assemblies 1660-1840 where I came across a short discussion of changes to the dancing floors around the regency period. The evidence was somewhat contradictory. Apparently sprung floors were being introduced at much the same time as floors became highly polished – the one facilitating springing steps while the other encouraged sliding steps. Did they indeed affect the dancing style and technique of the time – perhaps further research is needed?

So, to return to my original problem, was regency dancing full of small jumps similar to those taught in a modern ballet class? Or was it based on jumps that weren’t quite jumps, making it lively and bouncy but with the emphasis on controlled vivacity rather than aerial feats?