Earlier this year, I wrote a series of posts on pas battus in stage dances for men and women. My starting point was the oft-repeated but questionable statement that Marie Anne Camargo was the first woman to perform an entrechat-quatre on stage (see my post ‘La Camargo and the Entrecht-Quatre’) and my original focus was the use of jumped pas battus in the notated dances of earlier female professional dancers. I also looked at the use of such pas pattus in the stage dances for men, with some interesting results in terms of the choreographic preferences of individual dancing masters. My last such post was a while ago, so here is a reminder of what I have written so far in chronological order of their publication:

‘Stage Dances for Women and the Demie Cabriole’

I have a few more topics to explore before I leave this complex area and I’ll pick up the thread with Feuillet’s ‘Table des Entre-Chats’ (Choregraphie, p. 86). 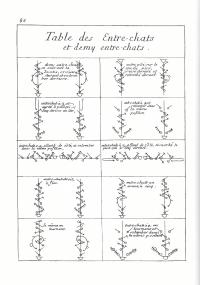 Feuillet notates five different entre-chats (I’ll use his spelling here to differentiate them from the modern steps) together with some variants. Only some of them correspond directly with the entrechats to be found in modern ballet technique.

The Demi Entre-Chat is similar to a modern brisé. Feuillet shows the step both to the front and the back.

The Entre-Chat à 3 is much the same as its modern equivalent, although the notation does not show the legs beating together in the air (Feuillet could have used a cabriole sign, but its omission suggests that this wasn’t a feature of the earlier step). He adds a step by the free foot after the jump.

The Entre-Chat à 4 begins and ends in second position, as an échappé battu would today. Feuillet also shows it travelling sideways and with a tour en l’air.

The Entre-Chat à 5 seems to have no modern equivalent. It begins with a spring and the back leg moving forward to initiate the beat, which closes front and back before finishing front giving it the feel of an entrechat-six. Feuillet also shows it with a half turn in the air.

The Entre-Chat Droit à 6 is the same as the modern step.

Feuillet seems to be presenting a selection of entre-chats, and it is not clear how these might relate to the range of such steps in use at the time he was compiling his treatise. The term ‘droit’ seems to refer to a vertical jump from two feet to two feet while the use of the term ‘en avant’, as well the specific reference to beginning and ending in the second position, suggest that there may have been other versions of these entre-chats. All surely belong to the stage and not to the ballroom, so I will turn next to the notated theatre dances for men to see what additional information they might provide.