Guillaume-Louis Pecour’s ballroom duet L’Allemande was first published in notation in Paris in 1702. It had originally been performed by Claude Ballon and Marie-Thérèse Subligny in the ballet Fragments de Mr de Lully that same year.

Its ensuing popularity was such that it was published again by Pierre Rameau in his revised version of Beauchamps-Feuillet notation within his Abbrégé de la nouvelle méthode in 1725, alongside other much-loved ballroom duets. L’Allemande was also included in the second and third editions of Rameau’s treatise, published around 1728 and 1732. Magny included the dance in his Principes de choregraphie, published in Paris in 1765. This marked its last appearance in notation, for which Magny had given the dance a different tune. In her catalogue of surviving French dance notations, La Belle Dance, Francine Lancelot notes several manuscript versions of the duet some of which vary from the original.

With such a popular choreography, it is perhaps surprising that no dance with the title L’Allemande was (apparently) advertised by London’s theatres until 2 January 1735, when Mlle Chateauneuf gave it as a solo at the Little Theatre in the Haymarket. When she returned to London for the 1739-1740 season, this time appearing at Drury Lane, she reprised her solo L’Allemande. The following season, again at Drury Lane, she was advertised with the dancer Muilment in a duet entitled L’Allemande. The dance was obviously very popular, for it was given in the entr’actes more than 20 times between 30 September 1740 and 5 May 1741. There is no evidence to tell us what sort of dance either the solo or the duet L’Allemande were, but could the latter have been Pecour’s famous choreography of nearly 40 years earlier? Both Mlle Chateauneuf and Muilment had been described as ‘lately arriv’d from Paris’ on their first appearances at Drury Lane, on 13 September 1739 and 18 November 1736 respectively, so they are likely to have encountered the dance there. If it wasn’t Pecour’s L’Allemande, then the duet given in London must surely have included what became known as the ‘allemande’ hold, in which the two dancers interlace arms behind their backs for some sequences of steps. This was a particular feature of Pecour’s choeography, depicted in the 1702 notation because of its novelty. 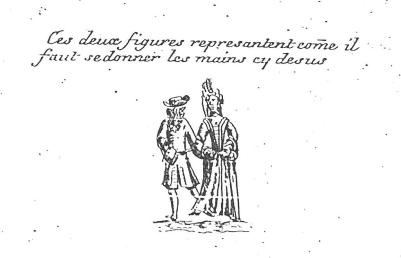 When the allemande re-emerged in the 1760s, as a contredanse (a type of cotillon) and then a duet, this arm-hold was still much used.

There seems to be no particular reason for the billing of an allemande in London’s theatres during the 1730s and 1740s. The dance was, presumably, part of Mlle Chateauneuf’s repertoire and became popular with audiences when she introduced it to London.

There were a number of other allemande dances on the London stage around the same period, some of which may have been trying to capitalise on Mlle Chateauneuf’s success. Two were given at benefit performances for the dancers concerned: La Pantomime de Suisse et D’Alemande performed by the ‘French Boy and Girl’ at Covent Garden on 13 May 1740; and a ‘Comic Dance call’d L’Allemande’ given by Picq and Sga Campioni at the same theatre on 18 April 1745. There was a ‘New Dance call’d Les Allemands Joyeux’ given by Lalauze and Mlle Auguste at Covent Garden a handful of times during the 1741-1742 season, which sounds like dancing Germans rather than a purportedly German dance. And what was the ‘New Grand Ballet called Les Allemandes’ performed by Cooke and Sga Campioni with supporting dancers at Covent Garden several times during the 1745-46 season? Following this ‘Grand Ballet’, the allemande was not to return to the London stage until the 1767-1768 season, when the entirely new dances entitled ‘allemande’ had become the rage.