As every musician knows (but not necessarily every dancer), the passacaille is a set of variations over a repeated 4-bar bass line. It shares this musical form with the chaconne, although the notated dances surviving from the 18th century reveal several differences between them. In her recent book Dance and Drama in French Baroque Opera, Rebecca Harris-Warrick looks at passacailles and chaconnes from various perspectives. Her observations are of interest in relation to the appearance of these dances on the London stage. Harris-Warrick points out that passacailles have a slower tempo than chaconnes and that they are often found in association with women ‘not infrequently when seduction is involved’ (p. 60). She also explains that they are the longest of the dances performed on stage and usually feature soloists and groups of dancers in their choreography (although this is not the case with the notated dances).

Passacailles are indeed the longest of the surviving recorded choreographies, in particular two solos created for female professional dancers: Anthony L’Abbé’s ‘Passagalia of Venüs & Adonis’ for Hester Santlow to music from Desmaret’s 1697 opera Vénus et Adonis, 209 bars; Guillaume-Louis Pecour’s ‘Passacaille pour une femme’ for Marie-Thérèse Subligny to music from Gatti’s 1701 opera Scylla, 219 bars. In all six passacailles survive in notation, published between 1704 and the mid-1720s. All are to music from French operas, four are female solos, one is a female duet and one is a duet for a man and a woman.

Advertisements indicate that the passacaille was performed in the entr’actes at London’s theatres quite regularly between the 1705-1706 and 1735-1736 seasons. It was given either as a solo or a duet but not, apparently, as a group dance. The solos are exclusively performed by women, from Mrs Elford at the Queen’s Theatre on 13 June 1706 (when she danced a ‘Chacoon and Passacail’) to Mrs Bullock at Goodman’s Fields on 13 October 1735. Duets were quite rare, although four different couples were billed between 1715-1716 and 1725-1726. After 1735-1736, the dance type disappears from the bills, except for a single performance of ‘A New Dance call’d Le Passecalle de Zaid’ by Anne Auretti at Drury Lane on 26 March 1754 (the occasion was her benefit). The passacaille reappears in the early 1770s for occasional performances until the mid-1780s.

For most of the passacailles performed in London, it is all but impossible to know what was danced either in terms of the music or the choreography. There are exceptions. The earliest is Pecour’s version of the passacaille from Lully’s 1686 opera Armide, created as a solo for Mlle Subligny and performed by her ‘en Angleterre’ during the winter of 1701-1702 – the only time she visited London. This demanding solo (a mere 149 bars) was published in notation around 1713. 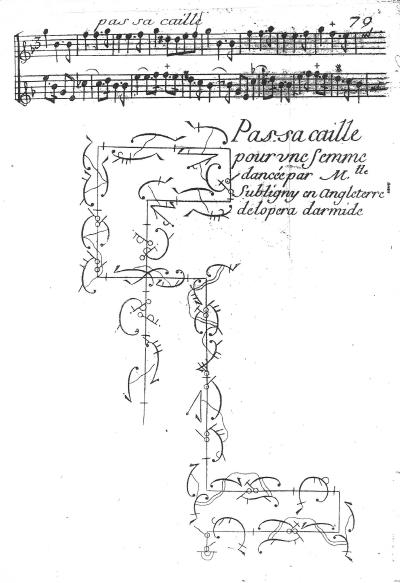 Anthony L’Abbe’s version of the passacaille from Lully’s Armide was created as a female duet, and must have been danced late in the 1705-1706 season in the brief interval between Mrs Santlow’s debut and Mrs Elford’s retirement.

In his Preface to The Art of Dancing, the manual of dancing he published in 1735, Kellom Tomlinson referred to ‘Miss Frances, who, on the Theatre Royal in Little Lincoln’s Inn Fields, performed the Passacaille de Scilla, consisting of above a thousand Measures or Steps, without making the least Mistake’. He seems to be referring to the music from Gatti’s Scylla, if not to the choreography created by Pecour for Mlle Subligny (although neither the music nor the notated dance extends to a thousand bars). A Miss Francis did in fact dance a ‘new Passacaille’ at the Lincoln’s Inn Fields Theatre on 19 March and again on 27 April 1719. The other exception is, of course, L’Abbé’s solo for Mrs Santlow referred to above. Although no date or place for a performance of this choreography is known, it is a stunning example of the challenges of such a dance.

Was the music for the other passacailles billed in the early 18th century invariably French? There are some beautiful examples of the dance type (usually titled chaconnes but with the features of passacailles) among late 17th-century music by English composers. Some of these were undoubtedly danced in the semi-operas of the period. Did any of the other performers billed in passacailles dance the choreographies that have survived? Mrs Bullock is known to have been a virtuoso dancer. She danced a passacaille with Charles Delagarde at Lincoln’s Inn Fields on 7 May 1716 as well as her later solo, either of which could have drawn on notated dances. Since they were showpieces, it is not surprising that most passacailles were billed for benefit performances, although not always the dancer’s own. It is interesting that not one of the named performers, male or female, of passacailles given in London up to 1735-1736 is French. There are many puzzles about French dancing in London’s theatres in the early 18th century.