According to the cast list in Weaver’s scenario for The Loves of Mars and Venus, Mars had four ‘Followers’ danced by Mr Prince, Mr Boval, Mr Wade and Mr Birkhead. They were the first characters to appear in the afterpiece, coming onstage at the end of the overture to perform a Pyrrhic Dance before the arrival of Mars himself. If Weaver’s description of the action in scene four is to be taken literally, they represented the strength and vigour of warriors. The four dancers who took the roles of the Followers are not listed alphabetically, so perhaps the order of their names reflects their status within the company (if it is not simply random). Weaver does not distinguish between them, as he does with the Attendants on Venus.

The first name is that of Mr Prince. It is difficult to disentangle the various dancers named Prince who worked in London’s theatres in the years before and after 1700. The dancer in The Loves of Mars and Venus has been identified as the Joseph Prince who in 1678 married Judith Channell (daughter of Luke Channell, a leading dancing master of the late 17th century). This seems unlikely, as Joseph Prince would have been around 60 years old in 1717, rather older than the other dancers in the ballet. Was he the ‘famous Dancing-Master’ named Prince who died in 1718? This man may have been the Mr Prince who is recorded as dancing in London’s theatres from the mid-1690s and who danced alongside John Weaver in the 1701-1702 season. Was he the Prince commended by the Spectator for his choreography in 1712?

Mr Prince’s repertoire seems to have been mainly comic, but there are so few records of him dancing that it is impossible to be sure.

Second on the list of Followers is Mr Boval. He was a relative newcomer to the London stage, for he is first recorded as dancing at the Lincoln’s Inn Fields Theatre in 1714-1715. Like several of the other dancers engaged by John Rich following the reopening of that theatre, Boval may have been French. His repertoire in his first season included Harlequin and Two Punches (probably as a Punch) and a Grand Spanish Entry. After he moved to Drury Lane, for the 1715-1716 season, Boval appeared in the pastoral divertissement from the masque Myrtillo as well as performing an unspecified ‘New Dance’ with Prince and Birkhead. The records for Boval’s repertoire are scant but they suggest that he was a versatile dancer in both the serious and the comic styles.

Mr Wade’s first known billing was at Drury Lane during the 1711-1712 season (other records name him as John Wade). His early repertoire included the Dutch Skipper and the French Peasant, suggesting that he was mainly a comic dancer. In Weaver’s ‘Dramatick Entertainment of Dancing in Grotesque Characters’ The Shipwreck; or, Perseus and Andromeda, given at Drury Lane on 2 April 1717, Wade was billed as the Monster Crocodile (which presumably tried to devour Andromeda/Colombine, played by Mrs Bicknell, until Perseus / Harlequin, played by Weaver, intervened). Does the casting indicate that his skills extended to broad comedy?

The last of the four Followers of Mars is Matthew Birkhead. He was first recorded at Drury Lane during the 1707-1708 season, although his career may well have begun earlier. Birkhead was both an actor and a dancer. As a supporting, rather than a leading, player he was not always mentioned in the bills, so it is difficult to get a full picture of his repertoire. Among the dances he is known to have performed are the Miller and His Wife, Four Scaramouches, a Country Man and Woman, the Boor Left in the Lurch and a Wedding Dance (with Prince among others). Birkhead’s skills evidently ran in the direction of broad comedy.

Prince, Boval and Birkhead danced together several times, if not regularly, during the 1715-1716 season, so perhaps there were similarities in their dancing styles and techniques. All four of the Followers of Mars seem to have been versatile performers, with Mr Prince the most senior among them. Boval, Wade and Birkhead were all definitely supporting dancers. Such evidence as there is suggests that, although they probably could portray the strength and vigour wanted by Weaver, their dancing could not (and was not intended to) challenge the sophisticated virtuosity of Louis Dupré as Mars.

There are no known portraits of any of these men. For The Loves of Mars and Venus were they costumed in a style reminiscent of the conventions of the French ballet de cour and opera? 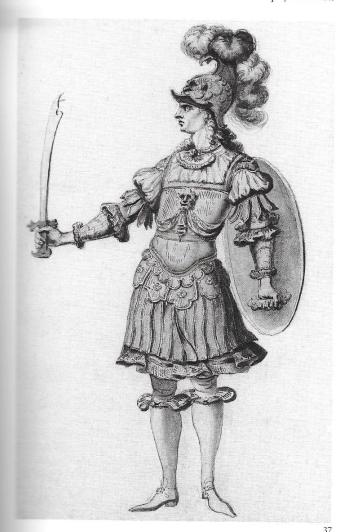 A late 17th-century costume design for a ‘Combattant’. Did the Followers of Mars wear something like this?

Or did they merely add a breastplate, shield and sword to less military attire. A plate in Lambranzi’s Neue und Curieuse Theatralische Tantz-Schul provides an idea (if you ignore the hats). 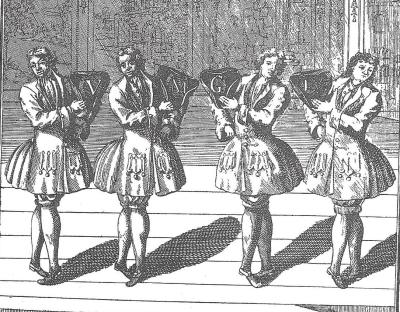 I will consider the dances of the Followers of Mars in a later post.