Weaver’s scenario for The Loves of Mars and Venus lists the 3 Graces as ‘Constant Attendants on Venus’. Aglaia was danced by Mrs Bicknell, Thalia by Mrs Younger and Euphrosyne by Mrs Willis. The ‘Hour’, whom I have elsewhere identified as one of the Horae or Seasons and probably Flora, has no performer named, but it may be possible to discover who among the women in the Drury Lane company for the 1716-1717 season might have danced the role.

The three Graces were, collectively, goddesses of beauty, but each also had an individual personality. Aglaia was associated with splendour and glory, Thalia with prosperity and festivity and Euphrosyne with joy and mirth. Weaver must have been well aware of these characteristics since he gave them their own names in his cast list. Did this affect his casting of these roles, or was that based purely on practical considerations?

Aglaia (splendour, glory) was performed by the actress-dancer Margaret Bicknell. Born Margaret Younger in Edinburgh in 1681, she was first recorded at Drury Lane as a dancer in 1702 with her first known billing as an actress in 1703. By 1709, she had evidently become a favourite of Sir Richard Steele. Following her first appearance in the title-role of Wycherley’s The Country Wife on 14 April 1709, he wrote in the Tatler that she made ‘a very pretty Figure’ and had ‘a certain Grace in her rusticity’. In the Spectator, a while later, he wrote of her performances:

‘One who has the Advantage of such an agreeable Girlish Person as Mrs. Bicknell, joined with her Capacity of Imitation, could in proper Gesture and Motion represent all the decent Characters of female Life’.

He was obviously captivated by her powers of mimicry, a useful skill in the context of John Weaver’s ambitions for the art of dancing. As an actress, Mrs Bicknell appeared almost exclusively in comedy, taking supporting as well as leading roles. As a dancer, she had a relatively narrow repertoire which centred on comic duets and did not (so far as we can tell) include any of the important serious dance types like the passacaille or the saraband.

Thalia (prosperity, festivity) was danced by Mrs Bicknell’s sister Elizabeth Younger, born in 1699. She had made her first stage appearances as a child actress, joining the adult company at Drury Lane for the 1712-1713 season. Miss Younger made her first solo appearance as a dancer at that theatre on 3 May 1714, dancing a saraband and a jig. As both an actress and a dancer, she had a wider repertoire than Mrs Bicknell and must have been trained in ‘French Dancing’ (which her sister possibly was not). A few years later, Anthony L’Abbé created a Turkish Dance duet for her and the young virtuoso George Desnoyer which was published in notation in the mid-1720s. It shows that she had a good belle danse technique.

According to Weaver’s scenario, Euphrosyne (joy, mirth) was danced by ‘Mrs. Willis’ but the performer was surely her daughter Miss Willis (as stated in the advertisements for The Loves of Mars and Venus). Mary Willis, probably born in the 1690s, was an actress who occasionally danced. She was a supporting player, too far down the company’s ranks to get individual billing in advertisements regularly, so we have almost no evidence about her dance repertoire. However, it seems unlikely that she had much grounding in ‘French Dancing’.

The most plausible if not the only candidate for the role of the ‘Hour’ (probably Flora) is the singer-dancer-actress Miss Lindar. So far, I haven’t been able to discover exactly who she was and where she was from. She may have begun her career at Drury Lane around 1715, although she was not mentioned in the bills until 14 May 1717 when she gave a new prologue to John Fletcher’s comedy Rule a Wife and Have a Wife. The following season, on 30 October 1717, the advertisements declared that the dancing would include ‘A Chacone, a Minuet and a Jigg by Miss Lindar, being the first time of her Dancing on any Stage’.  As with many other performers of the time, this was simply an advertising ploy and need not be taken as the literal truth. The listing indicates that she had been trained in ‘French Dancing’ and she was later billed as the scholar of Mr Shirley, a London dancing master who may well have known John Weaver. It seems likely that in 1717 Miss Lindar (like Elizabeth Younger a few years earlier) was making the transition from a child to an adult performer. She was possibly in her mid-teens.

Sadly, we have no known portraits of Margaret Bicknell, Elizabeth Younger, Mary Willis or Miss Lindar. Here is an image of three female dancers in a pas de trois from a few years later, suggesting how the three Graces may have appeared in Weaver’s ballet. 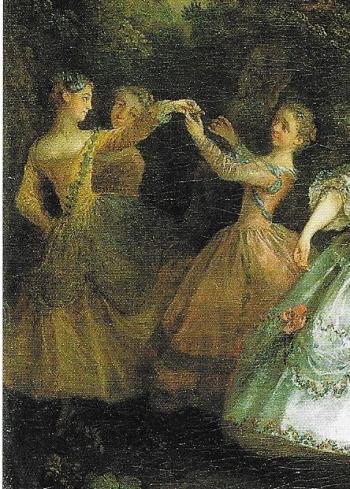 Weaver’s three Graces were competent and experienced stage dancers whose skills did not reach anywhere near the heights of Hester Santlow as Venus. As actresses, however, they must surely all have been able to portray characters even without words (as Steele’s description of Margaret Bicknell shows). Miss Lindar, as the Hour, had less experience but the advantage of training in ‘French Dancing’. Perhaps she was less in evidence as a character in the ballet (as Weaver’s scenario hints), but she must have been able to participate fully in the dances by these ‘Attendants on Venus’ in scenes 2 and 4.