Prince Frederick, ‘A New Dance’ by Anthony L’Abbé, was notated and published in 1725 by Edmund Pemberton. 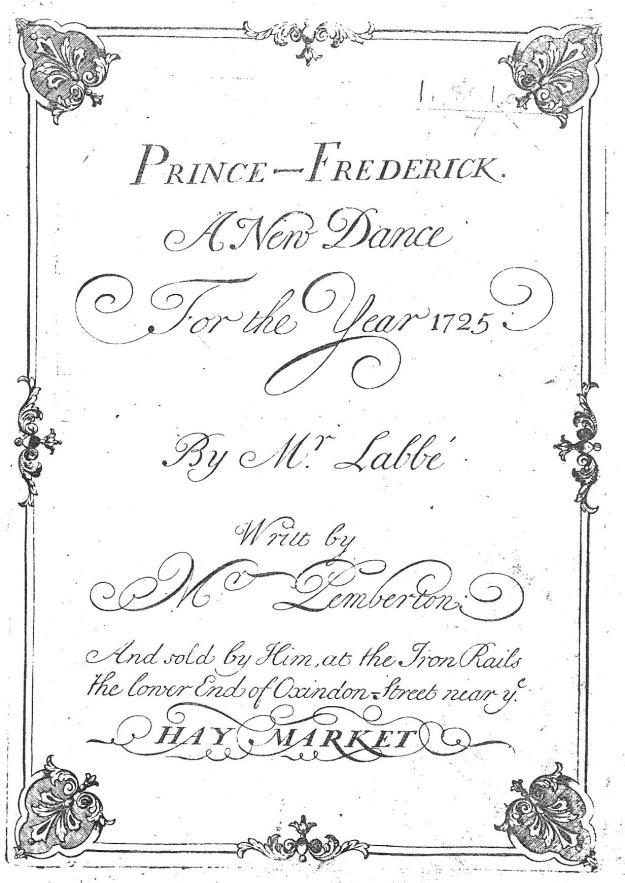 The title indicates that the dance was dedicated to the eldest son of the Prince and Princess of Wales (who would soon become King George II and Queen Caroline). The publication of the dance was advertised in the Evening Post for 9-11 March 1725. The date links it to Caroline’s birthday on 1 March, although the bare description of it as ‘A New Dance’ suggests that it was not performed at court. I have not been able to find any record of a court ball in honour of the Princess’s birthday that year.

Prince Frederick was still in Hanover, where he had remained as the representative of the electoral family when his parents travelled to England in 1714 following the accession of his grandfather (Elector of Hanover) to the British throne as George I. In 1725, Frederick turned 18 and thus officially came of age. This event was celebrated in Hanover, where the festivities included a ball at which Frederick opened the dancing with the Countess Amalie von Platen (who may have been the daughter of George I). Perhaps L’Abbé intended his ballroom dance to honour Frederick’s majority and be a compliment to the prince’s mother. If so, it was unlikely to have found favour in London – both of the prince’s parents disliked him.

L’Abbé’s Prince Frederick is described on the notation as a ‘Slow Minuet’. The music has been identified as a song The Beauteous Cloe. The single-sheet version is undated (although ascribed a date of 1715 or 1720 in some sources). It also appears in A Choice Collection of English Songs Set to Musick by Mr Handel, published by John Walsh around 1730. It has been further identified as a reworking of Teofane’s aria ‘S’io dir potessi’ in act 2 of Handel’s 1723 opera Ottone. If, as has been suggested, Handel himself transformed the aria into the song, he must have been happy to do so soon after the first performances of Ottone on the London stage. Did he perhaps revise the music for the ball dance first? Handel was employed by George I at the same period as L’Abbé was dancing master to the King’s grand-daughters. The two must have known one another, and Handel – like L’Abbé – may have wished to honour Prince Frederick, who would in due course become Prince of Wales and might one day be king.

The description ‘Slow Minuet’ on the notation cannot be taken too literally, but it accords more with the slow sad aria of Ottone than the lively light-hearted song The Beauteous Cloe. I am currently working on L’Abbé’s Prince Frederick so I will return to the choreography and its interpretation in a later post.