My work in baroque dance has always had a strong practical element. I find it easier to understand and write about the dances I have reconstructed. Much of my earlier work was based around dances I actually performed. Performance opportunities are few and far between nowadays, for a variety of reasons, but I try to continue reconstructing notated choreographies as part of my research.

I’ve recently been working on a loure, a duet to the air ‘Jouissons les plaisirs’. The music is identified on the notated ‘Entrée pour un homme et une femme Dancée par Mr Balon et Mlle Subligny au Ballet des Fragments de Mr de Lully’ in the Recüeil de dances contenant un tres grand nombres, des meillieures Entrees de Ballet de Mr. Pecour published in Paris in 1704. The work of reconstruction has had its difficulties – I have a recording of the music which is beguiling but otherwise not great and I have nobody to partner me, which all too easily leads to misinterpretation of the notation. Yet, I have found this little dance to be utterly charming. It is so prettily evocative of the early 18th century that it has been a delight to learn. I would love to see it in a good performance.

I like to know about the original contexts for the notated dances I reconstruct. In this case the air seems to have been written for the 1670 comédie-ballet Les Amants Magnifiques – the ballet in which Louis XIV apparently did not after all make his final performances as a dancer. The notated choreography, and its music, are instead associated with the Ballet des Fragmens de M. Lully first given at the Paris Opéra in 1702. This ballet brought together pieces of Lully’s music from the ballets de cour and comédies-ballets of the late 17th century into several entrées arranged by Campra. Its popularity was such that it was revived in 1708, 1711, 1717 and 1722. In Les Amants Magnifiques ‘Jouissons les plaisirs’ was a vocal duet by shepherdesses, in the Ballet des Fragmens it was entitled ‘[Air] des Jeux Pithiens’ and formed part of the first entrée, a ‘Fête marine’, as a vocal duet by female sailors accompanied by the dance. I can’t quite relate either the song or the dance to the later context, but I’m probably missing something.

I have been looking at ‘Spanish’ loures, but this dance surely falls into the ‘pastoral’ category. It is short, with only 54 bars, and the music is a rondeau (ABACA, A has 9 bars, B has 12 and C has 16 bars). The music has the time signature 3, in common with the famous ballroom duet Aimable vainqueur. It is quite unlike the ‘Spanish’ loures in 6/4. Although it is a stage dance, there are no difficult steps in this little entrée. Many of the pas composées incorporate quarter, half or (occasionally) full turns and nearly half include small jumps, so the sequences are flowing and lively. There are coupés avec ouverture de jambe which provide a pleasing suspension of movement and several other steps with a similar feel of extension. I like to draw on ballet’s ronds de jambes, even demi grand ronds de jambe, to give a greater sense of amplitude. The little jumps woven throughout add energy and make the pas de bourée and other ‘walking’ steps feel light and playful rather than languid. I haven’t yet mastered the musicality of this choreography, but I’m sure that if and when I do it will add to the pleasure of dancing it.

Perhaps the most important aspect of the dance is its figures, not so much the movement of the dancers within their stage space as the continually changing spatial relationships between them. They turn towards and then away from each other, face or turn their backs on one another, approach and retreat as they dance. On the page, the floor patterns look completely conventional, even banal, but they are transformed by the way the dancers turn on their own axis and move around each other. Without a partner it is difficult to be sure, but my guess is that the figures are quite tight and the couple stay close to one another much of the time, particularly when they circle and cross. There are many opportunities for interaction, through glances, turns of the head and épaulement as they move through their shared space. Even without a partner, the choreography conjures up the graceful flirtation of a fête galante. It brings to mind the paintings of Watteau, Lancret and Pater. It would be so easy to perform as a tiny drama of pastoral love and pleasure.

Lancret’s painting of Mlle Camargo and her partner is some thirty years later than the dance to ‘Jouissons les plaisirs’, but it gives a good idea of the style and affect of such a duet. 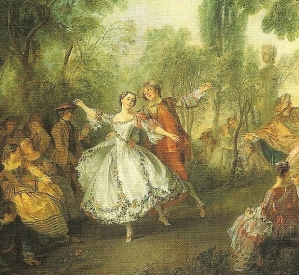