A while ago, I had the idea of looking at significant dance events year by year, placing them within a wider context and slowly developing a more detailed chronology than most dance histories can provide. 1714 seems as good a place to start as any. The year was notable for the death of Queen Anne, on 1 August, and the accession to the British throne of her protestant cousin the Elector of Hanover as King George I.

At the English court the social calendar revolved around royal birthdays, the accession and coronation days of the current monarch, New Year’s Day and Twelfth Night. All were occasions for dancing. Queen Anne’s birthday on 6 February had been the occasion of festivities throughout her reign. 1714 was no exception, with music, a ball and a ‘splendid entertainment’ at Windsor in the presence of the Queen herself. Her dancing master Mr Isaac created a new dance in her honour, The Godolphin named for Lady Harriot Godolphin the grand-daughter of the Duke and Duchess of Marlborough and (at the age of fifteen) a lady of the bedchamber to the Queen. The dance was published in notation on 11 February 1714. 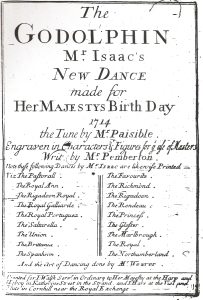 The status of another dance, published on 4 March 1714, is uncertain. The only surviving copy of The Siciliana by Siris has no title page but, like Isaac’s choreography, it was published by John Walsh and may have been intended to capitalise on the Queen’s birthday celebrations.

George I arrived in England before the end of September 1714, with his son the new Prince of Wales. His daughter-in-law Princess Caroline arrived in London, with her three daughters, in October. The coronation took place in late October 2014. There are no records of any balls at court or the publication of any dances until the following year, when the usual festivities were resumed.

One other event of note was the re-opening of the Lincoln’s Inn Fields Theatre, renewing theatrical competition in London. This led very quickly to a great deal more dancing in the playhouses.  It seems that there was dancing at the first performance at Lincoln’s Inn Fields and there were at least six dancers (two women and four men) in the company. They appeared regularly throughout the season.

In London, dances were often published singly in notation whether or not they had a royal connection. In Paris, small collections of dances were published ‘pour l’année’ in time for the balls held during the carnival season (between Twelfth Night and the beginning of Lent). The XIIe Recueil de danses pour l’année 1714, published by Jacques Dezais, contained three duets – La Gavotte de Seaux and a Rigaudon by Claude Ballon and Dezais’s La Chamberi.

The Château de Sceaux was the venue for an experiment in dancing. At one of the duchesse du Maine’s ‘Grands Nuits’ of entertainments during 1714, Mlle Prévost and M. Ballon (leading dancers at the Paris Opéra) gave a scene from Corneille’s tragedy Les Horaces as a ‘danse caracterisée’. They performed with such intensity that they reduced themselves, as well as their audience, to tears. This event calls into question the idea that French stage dancing was fundamentally inexpressive. By 1714, Louis XIV’s long reign was drawing to a close and changing times were signalled at the Paris Opéra by the production of its first lyric comedy, Mouret’s Les Fêtes de Thalie.

Were all these events quite separate? Surely not, although the influences that flowed between them have yet to be explored.