Dancing in London’s theatres during the 18th century is a topic that has not attracted dance historians. There are very few reliable accounts and no extended study has so far been published. My work in this area began when I did my PhD on the English dancer-actress Hester Santlow, whose dancing career began in 1706 and ended when she retired from the stage in 1733. I found myself trying to reconstruct the context within which she danced, as well as her dancing repertoire. My thesis was entitled ‘Art and Nature Join’d: Hester Santlow and the Development of Dancing on the London Stage, 1700-1737’. Since then, I have extended my interest to dancing on the London stage from 1660 to 1760. Central to this period are, of course, the notated theatrical dances published in the early 18th century to which I referred in my earlier post Stage Dancing.

The paradox of any research into dancing on the London stage is that the dances, with the exception of the handful of notated choreographies, have entirely disappeared. There are also very few portraits of dancers or depictions of dancing before the late 18th century. Any research is therefore very challenging. This is probably why the period has attracted little or no interest from dance researchers. There is also the bias towards dancing in Paris, which is widely seen as the sole centre of serious dancing at this time.

Yet, this was a particularly exciting period for London audiences, who were avid followers of dancers and their repertoire. ‘French Dancing’ reached London from Paris not long after the Restoration in 1660. French stars came to the English capital, where they could make good money in the commercial theatres. Claude Ballon made a brief visit in 1699 and his favourite dancing partner, the ballerina Marie-Thérèse de Subligny, came in 1702. There were also home-grown dance celebrities who could equal them in the style and technique of serious dancing, notably Hester Santlow. The British developed their own dances and genres of dancing. Among the former was the hornpipe, acknowledged as an ‘English’ dance. Among the latter was the first modern ballet, created by John Weaver, a theorist as well as a dancer and a dancing master. The Loves of Mars and Venus, performed at the Drury Lane Theatre in 1717, was the first dance work with recognisable characters and a story in which the entire narrative was conveyed through dance and gesture alone, with no sung or spoken words. This was a significant development in the art of dancing and must surely have influenced the French ballerina Marie Sallé, who also came to dance, and experiment with dancing, in London.

Dancing was popular in London’s theatres throughout the 18th century. Dances were regularly performed between the acts of plays (entr’acte dances). There was a great deal of dancing (serious as well as comic) in the pantomimes that became popular from the 1720s and there were dance divertissements in plays and musical works. The entr’acte dances were many and various, from speciality comic dances drawing on indigenous dance forms to complex and virtuosic serious dances deploying the style and technique of French professional dancing.

I will try to reveal some of this wealth of innovative dance entertainment in future posts. 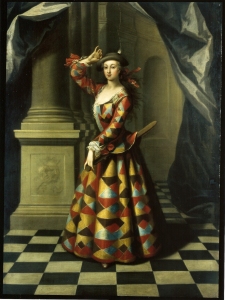