The first and only dance for four to appear in an English source was Mr Holt’s Minuet and Jigg. Who was Mr Holt and why did he create this choreography?

This dance for four was published in London in 1711, in Edmund Pemberton’s An Essay for the Further Improvement of Dancing. The collection of ‘Figure Dances’ was entirely for female performers, although Pemberton never mentions this fact. The title page says nothing. The Preface focuses almost exclusively on the significance and value of the new system of dance notation used to record the choreographies. Even the dedication to Thomas Caverley, noted as a teacher of young ladies, avoids any reference to female dancers.

Mr Holt was obviously deemed worthy of a place among ‘the most Eminent Masters’ (according to the title page) whose dances were published in Pemberton’s collection. There were several Holts, dancing masters and musicians, working in London during the early 1700s. Which of them created this Minuet and Jigg? Among the subscribers to the publication (who had paid in advance for copies in order to finance the printing) are Walter Holt and William Holt. The choreographer must have been one of them, but which one?

Various dancing masters named Holt subscribed to dance treatises and collections of dances in the early eighteenth century. In 1706, Walter Holt ‘Senior’ and Walter Holt ‘Junior’, together with Richard Holt, subscribed to John Weaver’s Orchesography (his translation of Feuillet’s Choregraphie) and A Collection of Ball-Dances Perform’d at Court (his notations of choreographies by Mr Isaac). In 1721, Walter Holt and William Holt subscribed to Weaver’s Anatomical and Mechanical Lectures upon Dancing (which were delivered at ‘Mr Holt’s Dancing-Room, at the Academy in Chancery-Lane’ according to the Daily Post for 31 January 1721). In the early 1720s, too, Walter Holt, William Holt and ‘Mr. Holt Junior’ subscribed to Anthony L’Abbé’s A New Collection of Dances.  I suggest that Walter Holt ‘Senior’ was the ‘Musician’ who died in 1706 (his will survives in the National Archives at Kew) and that Walter Holt ‘Junior’ was his son, another ‘Musician’, probably born in 1676 who died in 1738 (his will is also in the National Archives). Richard and William Holt are likely to be the brothers of Walter Holt ‘Junior’, born in 1678 and 1691 respectively. William, who died in 1723 (his will is in the National Archives), was the choreographer of a ballroom duet Le Rigadon Renouvele published around 1720. ‘Mr. Holt Junior’ may well be another Walter, the son of Walter Holt ‘Junior’, born in 1701.

The only real candidate for choreographer of the Minuet and Jigg is Walter Holt ‘Junior’ (1676-1738). He is surely the ‘Mr. Holt’ listed among the dancing masters named by John Weaver in his 1712 An Essay towards an History of Dancing as ‘happy Teachers of that Natural and Unaffected Manner, which has been brought to so high a Perfection by Isaack and Caverley’. He was a contemporary of Weaver and must have been very well-established as a dancing master, unlike his much younger brother William. When he died in 1738, Walter Holt was described as ‘Mr. Holt, sen. a very wealthy and famous Dancing-Master’ (Weekly Miscellany, 15 September 1738).

What of the Minuet and Jigg itself? I will not analyse the choreography in detail, for there are others who are far more expert in this genre than I. The minuet has 48 bars and the jigg 32 bars, so the dance is quite long. The four ladies begin as two couples facing one another (two of the dancers have their backs to the audience). They face towards each other, in the manner of a country dance, for much of the choreography. The minuet section draws on the familiar figures of the ballroom minuet, including the S-reversed, taking right hands and taking left hands. It also uses figures from country dances, for example the square hey and the dos-à-dos. Only one step is specified in the notation – the pas de sissonne used in the jigg. Pemberton gives no advice about steps, but his reference to John Essex’s For the Further Improvement of Dancing (a translation of Feuillet’s 1706 Recueil de contredances), published in 1710, implies that he expects readers to look at that treatise for advice. The ladies complete the dance by opening into a semi-circle to face their audience. 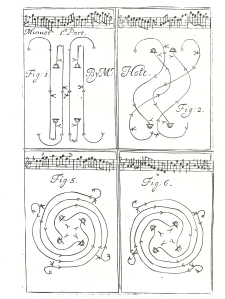 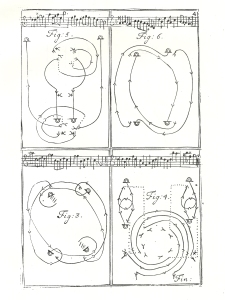 This choreography for four is simultaneously a means of teaching the genteel style and technique of both ballroom and country dances expected in English polite society and a contrivance for displaying the skills that could be learnt from the best dancing masters. It was probably created for performance by his female scholars, before an audience, at Walter Holt’s Academy.