I have been discussing quadrille steps with an historical dance teacher of my acquaintance and he has been wondering about the origins of the pas de basque. In 1827, Charles Mason described it thus in his A Short Essay on the French Danse de Société: 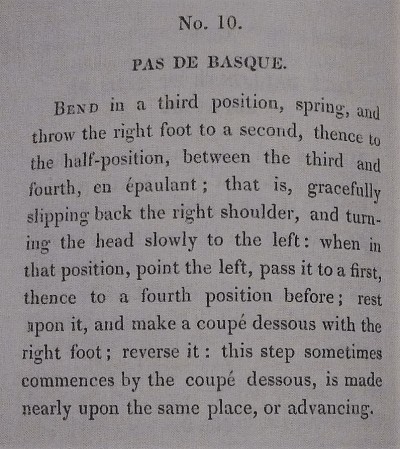 There are several versions of this step in both modern and historical genres of dance, some of which can be traced back a long way – although, so far as I know, none are given the name pas de basque before the early 19th century.

I am sure that there are various theories about the origins of the step, although from my perspective it seems likely that the versions used in early 19th-century quadrilles owe something to the vocabulary of early 18th-century ballroom dancing. Recognisably related steps can certainly be found in the notated dances of the early 1700s. Where did the name come from and when did it start to be used?

Mlle Théodore had begun her career at the Paris Opéra, where she made her debut in 1777. She had first come to London, and the King’s Theatre, for the 1781-1782 season where she had quickly become popular with critics and audiences alike. 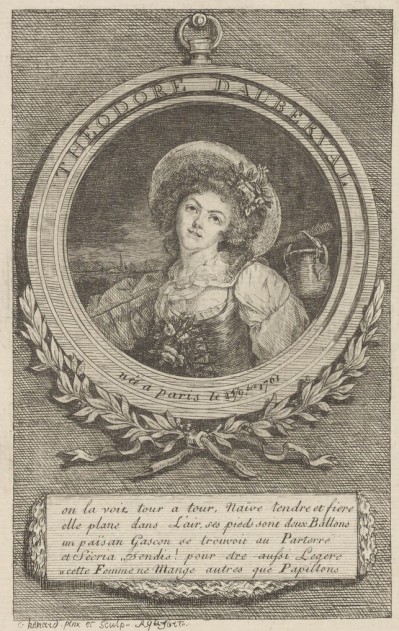 In 1783, she married the dancer and choreographer Jean Bercher, known as Jean D’Auberval, who would later create La Fille mal gardée with his wife in the title role.

Is it possible that these dances performed in 1783 and 1784 could have given a name to a step that would become part of the quadrille vocabulary? She seems to have made a mark with these solos. A critic in the Public Advertiser for 18 January 1783 wrote ‘The Theodore, in her two Pas de Basque, especially the latter, is every Thing that is meant by the Words Liveliness, Vigour, and Agility’. Another critic, in the Morning Herald a few days earlier on 13 January, gave additional details of the performance:

‘As long as the Theodore confines herself to those light and skipping motions in dancing, which have so powerfully recommended her to public notice, she will ever remain unrivaled. She was greatly and deservedly applauded in her two Pas de Basque; but especially in the last; when there happening a little accident of her shoe slipping off, she went on with her dance, and convinced the spectators, that shod or unshod, she is the liveliest of the lively train.’

Apart from the evident vivacity of her dancing, the mishap may well have drawn extra attention to her steps and ignited a desire to imitate them.

These Pas de Basque were performed in ‘an entirely new Ballet’ Le Tuteur trompé; or, the Guardian outwitted by Charles Le Picq, being performed for the first time on 11 January 1783. It was taken, in part, from Beaumarchais’s Le Barbier de Séville and according to the Morning Herald had dancing ‘which was mostly in the Spanish stile, and of course a novelty on this theatre’. The early 1780s were also a period when quadrilles were being danced both on stage and in the ballroom in London. Quadrilles were still quite new and may well have been establishing and extending both their steps and figures.

I don’t actually believe that Mlle Théodore and her dances introduced this step and gave it the name pas de basque. However, could they have played a part in its adoption into the ballroom and addition to the vocabulary of the newly emerging quadrille and even influenced its naming?